As the Top 12 draws near, viewers see Beyoncé and Good Charlotte on The X Factor Australia. Former Spice Girls Mel B and Mel C judge together.

It’s so close! The Top 12 performers on The X Factor Australia will be revealed and live performances will begin next week. 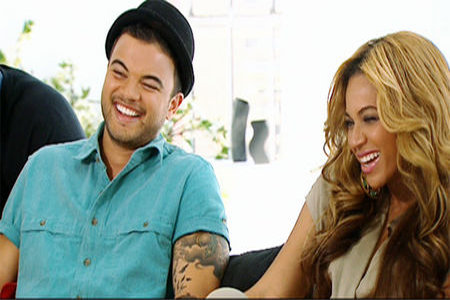 But before any of that can happen, the contestants need a bit more polishing — which is why guest judges critiqued their singing and stage presence on last night’s episode.

Continuing on with the home visits, Beyoncé  was back, along with Leona Lewis, a former X Factor UK winner, Benji and Joel Madden from Good Charlotte and Jason DeRulo. Plus, Mel B got to hang with her other half — no, not her husband, but former Spice Girl Mel C!

WHAT DO THE JUDGES THINK?

Under 25 Girls contestant Amy Walton’s rendition of Beyoncé ‘s If I Were a Boy was a hit with Mel C. The judge had less kind words for Sophie Metcalfe and wonders about the girl’s marketability. Declan Sykes in the Under 25 Boys group garnered praise from Beyoncé , who actually seems very positive toward all the contestants and tells them winning this contest does not have to make or break their careers. Not too shabby! She probably would have liked Emmanuel Kelly, too.

Marina Davis and Paige Elliot deliver fine performances in the Over 25 group, according to the judges, and in the groups, Young Men’s Society gets praise from both Ronan and the Maddens.