It debuted to 1.5 million viewers last season. But only 400,00 have watched Top Gear Australia in the last two weeks. Last night’s episode brought in even fewer than that. 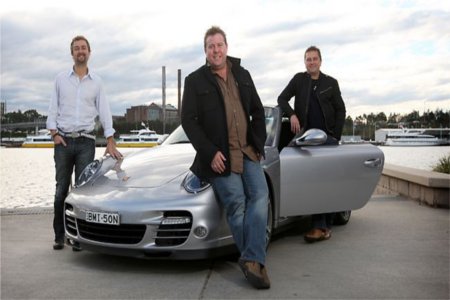 The death knell has sounded.

The final three episodes of the show may appear this summer, and while it has not been confirmed, there will most likely be no episode of the show next week. Oddly, last season’s final episode never aired either, perhaps a foreshadowing of the show’s demise. The show originally aired in 2008 on SBS and was moved to Nine in 2010.

DOOMED BY TOO MANY CHANGES?

The hosts were also switched around, with Charlie Cox replaced by James Morrison. Original host Warren Brown and Morrison were later replaced by Shane Jacobson and Ewen Page. There were reports the Australian car industry was none too pleased about the car wrecking that took place during filming.

Top Gear also appears in America, where it’s had more success. The show follows a similar format to the British version, with three hosts and a secret race car driver called The Stig who drives cars around like a maniac. There are challenges and celebrity appearances as well. It premiered last November and was renewed for a second season in February.

Top Gear comes to the U.S.