The new season of Beauty and the Geek Australia officially premieres next week. Some twists take place that turn everything upside down. 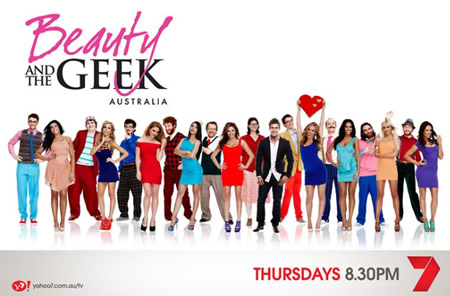 That’s what the third season of the Australian version of the U.S. reality show Beauty and the Geek will try to determine. After staying mum on the start date, it’s been announced the new season of the show will start next Thursday at 8:30 on Channel Seven.

It’s done a good job drumming up buzz by using Introvert, Extrovert, the original song by booted X Factor Australia hopeful Luke O’Dell, in the promo commercials. The shows insiders also revealed there would be a departure this season from the standard bevy of brainless beauties and cluster of fashion-clueless chaps. A boy named Troy will appear as an Adonis while Helen steps in dressed as a school librarian and donning glasses. Show host Bernard Curry told The West Australian it was certainly difficult for many of the girls to keep their cool around dreamy Troy.

If Curry’s reports are to be believed, many of the geeks from last season went on to succeed in love, nabbing some hottie girlfriends with the social graces they had learned on the show.

“They have a new confidence and they are all still friends and they catch up once a year,” Curry told The West Australian. “I don’t think (the show) makes the beauties smarter as such – it’s more about opening up their minds a little bit and making them more aware of the world around them.”

Beauty and the Geek Australia gets X Factor touch