Spartacus star Andy Whitfield dies of cancer at home in Sydney Sunday morning. The former model rose quickly to stardom in his leading role as a Thracian slave in Spartacus: Blood and Sand.

Andy Whitfield passed away surrounded by his wife, two young children and other family members, reports confirm. He was 39. 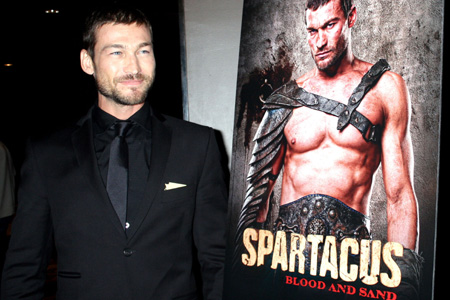 Whitfield had been diagnosed with cancer in March 2010, just before the second season of Spartacus was to begin shooting. While he underwent treatment, the Starz network aired a Spartacus prequel in Whitfield’s absence, but recast Aussie actor Liam McIntyre in the role when Whitfield’s condition deteriorated in January.

The Welsh native moved to Australia in 1999 and had roles on Packed to the Rafters and All Saints. Still it was his gladiator role in Spartacus, first made famous by American actor Kirk Douglas in 1960, that catapulted Whitfield to fame and made the series a rapid hit. Whitfield’s wife thanked his fans in addition to family and friends in a statement made Sunday.

“He passed peacefully surrounded by love,” she said in the statement. “Thank you to all his fans whose love and support have help carry him to this point. He will be remembered as the inspiring, courageous and gentle man, father and husband he was.”

Starz President and CEO Chris Albrecht said in a separate statement that “Andy was an inspiration to all of us as he faced this very personal battle with courage, strength and grace.”