Thursday’s episode of The X Factor Australia revealed that Mel B. will mentor the under 25 girls group, while Guy Sebastian got the under 25 boys, Natalie Bassingthwaighte gets the over 25s group and Ronan Keating has the groups.

The Veronicas served as guest judges and will also stand in during Monday’s episode. 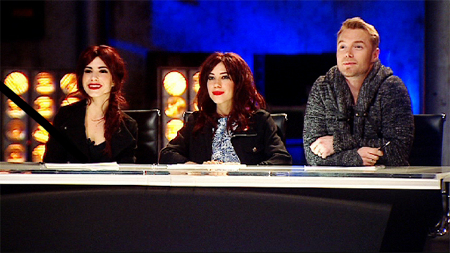 Other than that, viewers saw more performances from contestants who’ve advanced through auditions, including the teen twins behind female duo Upfront. The twins have been criticized for the Britney Spears-esque getups and heavy makeup they’ve worn while performing. Hype performed an Adele song, with the judges griping about how much they’re hearing of that singer’s music in auditions thus far (though they couldn’t argue with traffic worker Jayne Lilford’s spot-on rendition in her audition earlier this week). The under 25 boys had a fun time crooning female songs from Britney Spears and Lady Gaga, with Guy asking one contestant if he’s ever dressed up like a lady.

The contestants in the under 25 girls group also received choreography from a So You Think You Can Dance Australia instructor, with some doing better than others, and the over 25s group got styled for a photo shoot. Meanwhile, David Champion, who will manage whoever goes on to win the contest, has put his money on Reece to take the prize.

Viewers will have to wait till Monday’s episode of The X Factor Australia at 7:30 p.m. to find out the top six in each group.