It’s easy to forget that Jessica Mauboy started her music career as a runner-up on Australian Idol in 2006. Since then, she had a brief dalliance with the all-girl group Young Divas before she decided to go it alone. It was a smart move, as the Darwin-born singer has since had three top 10 singles, recorded tracks with Snoop Dogg and Flo Rida, and watched as her debut album Been Waiting went two times platinum! Now she’s back with a hot new look and an equally hot new album, Get ‘Em Girls. 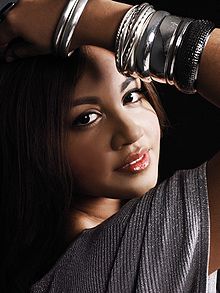 Q. You spent a lot of time overseas working on this album, how did that come about?

A. I did the whole recording in LA, New York and Atlanta, Georgia. There were so many producers and great people that I’ve met [from the US] and I made really good friends, so that was one of the deals to just say, “Yeah, I wanna work in New York!”

Q. Did you miss home?

A. I missed it so much. I missed the boyfriend because I had no-one with me, I was pretty much alone and just really found my way, so that was daunting, I was there for about three months doing the album. Oh my goodness though, my phone bill was about $2,000!

Q. How did you wind up working with Snoop Dogg on the Get ‘Em Girls single?

A. I had just finished the song and felt that it just needed something else. We looked for every kind of rapper, from Nicki Minaj to Lady Sovereign, but Snoop came back and he loved it. So we went with Snoop!

Q. This new album is a much sexier side of Jess Mauboy…

A. Absolutely, I just had to! I just wanted to get out and write something funky and cool. It’s so funny because I always put the music first, and you end up coming up with whatever the music is saying and telling you. So I always work with the music first and try not to get caught up in the fashion, and just let the music speak.

Q. You tweeted recently about a $2,000 shopping spree you recently went on…

A. Yeah, whoops! I just got a bit excited. We had the photo shoot and there were just a lot of opportunities to just grab things. I worked hard!

Q. We heard there was some competition to get a song between you and Miley Cyrus?

A. I love Iyaz and I met him before his song Replay was going crazy in the US. A few weeks later I was writing with Audius in Five Dock here in Sydney and Audius is great mates with Iyaz and sent him the song. I think at the time he was writing with Miley Cyrus and Miley heard it and was like “That’s a fricken’ awesome song.” Apparently she liked it and she wanted it, but I was like, “That’s my song so back off!”