Since 2007 Deputy Prime Minister Julia Gillard has been a quiet but constant presence by Kevin Rudd’s side. But on June 23 this year, the 48-year-old evidently decided that playing second fiddle was not enough: she challenged Rudd for leadership of the Labor party, and won.

On June 24, 2010 Julia Gillard was officially sworn in as Australia’s 27th Prime Minister, making history as the first female to ever take on this role. So what exactly do we know about the new leader of our country? 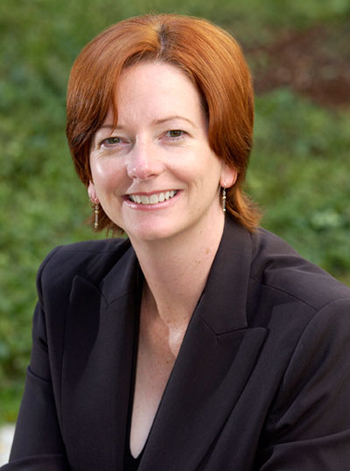 One thing’s for sure: Julia personal biography strays far from the standard political write-up.

To begin with, she wasn’t born in Australia. A native of Wales, Julia migrated to Australia with her parents and older sister when she was five.

She has never married, but lives with her partner of four years, Tim Mathieson, in a defacto relationship. She has no children, although Tim has three adult kids. She is pro-choice, but does not support the legalisation of gay marriage.

Julia is also not religious and doesn’t believe in God. During a radio interview on the ABC earlier this year, when asked if she believed in a higher power, Gillard honestly declared: “No I don’t, I’m not a religious person… During my adult life I’ve found a different path. I’m, of course, a great respecter of religious beliefs, but they’re not my beliefs.”

All personal beliefs aside, the flame-haired power broker’s rise to the top has been nothing short of phenomenal.

Destined to be a high achiever, Julia displayed ambition, drive and focus from very early on. Upon graduating and securing a job with law firm Slater & Gordon in Melbourne, Julia worked her way up the ranks in industrial law. Just three years later, at the tender age of 29, Julia became partner.

And then came her move into politics. The seed was sewn during her uni days, when Julia joined the campus Labor club and won election to a full-time position at the national student union.

By the 1990s Julia had unsuccessfully run for Labor preselection three times before going to work as the chief-of-staff for Victorian opposition leader, John Brumby, in 1996. During her three years with Brumby she drafted the affirmative action rules within the Labor Party in Victoria, which set the target of preselecting women for 35% of ‘winnable seats’.

In 1998 Julia became Labor’s candidate for the safe seat of Lalor in Melbourne’s outer-western suburbs. After Labor’s 2001 election loss she moved to the frontbench and served as the Shadow Minister for Population and Immigration between 2001–03 and the Shadow Minister for Health from 2003–06, before joining forces with Kevin Rudd as his Deputy.

In 2007 Julia made history as Australia’s first Deputy Prime Minister. In June 2010 she set a new record as the first woman to ever lead the country in the top job – but Julia is not content to rest on her laurels just yet.

“In the coming months I will ask the Governor-General to call a general election so that the Australian people can exercise their birthright and choose their Prime Minister,” she confirmed during her press conference on June 24.

The date of the next federal election has not been set, but it must take place on or before April 16, 2011.

“Between now and this election,” Julia said, “I seek the Australian people’s consideration and their support.”