From Atomic Kitten cutie to tragic train wreck, Kerry Katona’s certainly been through the wringer. But where did it all go so horribly wrong? How did the I’m A Celebrity winner go from being a chav-tastic national treasure to, frankly, a national embarrassment?

Things started to go wrong when Kerry and first husband Brian McFadden split in 2004, within what felt like minutes of her being crowned Queen of the Jungle. She admits turning to coke for comfort, and ended up in rehab soon afterwards. Her bipolar disorder was diagnosed at this point. 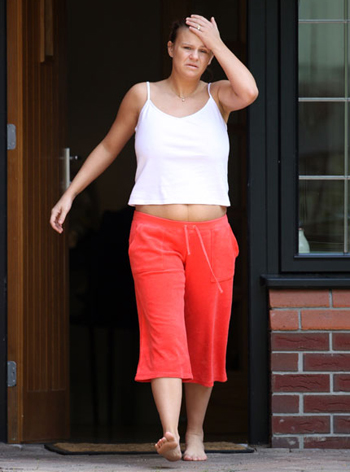 In no time Brian – dad of Kerry’s two daughters, Molly and Lilly – had been replaced by Mitchell brother-esque Warrington cabbie Mark Croft, and Kerry’s fall from grace continued apace. She was slated for smoking and drinking during her subsequent pregnancies with Heidi and Max, but had this to say in her defence: “I had a nicotine patch but it left a mark. I think I’ve done really well cutting down from 20 to one a day. I think the only times I really smoke is when I’ve had a drink.”

Things were pretty bad at this point

Kerry’s pregnancy with Max was blighted by a whole heap of problems. Rumours of Mark bedding a barmaid mixed with a tabloid story about Kerry snorting cocaine while pregnant plunged her into a depression. Production on her MTV reality show was even halted! A spell in The Priory followed.

Then they got even worse

In 2008, Kerry was declared bankrupt at the High Court after failing to pay a tidy £417,000 tax bill. Then there was her confused, word-slurring appearance on This Morning, which had Fern, Phil and most of the country either deeply concerned or cringing in embarrassment. Kerry sacked PR supremo Max Clifford in the wake of this latest embarrassing episode, after he expressed public concern for her well-being under Mark’s influence.

And, er, then they got worse still

After a tabloid expose revealed Kerry snorting cocaine at her pad in Wilmslow, Iceland, Kerry’s last big cash cow, finally pulled the plug after an admirable four-year stint. Kerry recently escaped charges over an alleged assault on her accountant, and she and Mark have split at least three times in 2009 so far. The year’s not over yet, of course…