Chris Pratt has sure come a long way since his Parks and Recreation days… and the series isn’t even over yet!

And we aren’t just talking about his rockin’ bod transformation. (You better believe I had to mention it.)

More: Chris Pratt admits his priorities shifted after the birth of his son

It seems like every major upcoming film franchise wants a piece of Chris Pratt right now.

The star made a huge break into the blockbuster field last year with his leading role in Marvel’s Guardians of the Galaxy. Now he’s a full-blown superstar — a status sure to be cemented in 2015 with the release of Jurassic World this summer.

Now Deadline is reporting Disney is circling the star for yet another major reboot: Indiana Jones. Say goodbye to the Shia LaBeouf story line that didn’t work so well and say hello to a new kind of hero. But Pratt and the former Indiana Jones, Harrison Ford, have some clear differences, and a new generation means a new franchise. Here’s how we think the story will change with Pratt in the lead.

Pratt can’t help but bring humor to whatever role he takes on, proving that his rock-hard abs (yup, had to go there again) don’t keep him from being a comedian. And while Ford was definitely charming as Indy, Pratt slinging that whip is bound to have me cracking up.

2. Indy won’t be such a jerk to the ladies

The Indy of the past could never settle for just one lady. And he left a trail of scorn in his wake of adventures. We’re guessing this time around, he just might have to contend with a few headstrong ladies who won’t just let him save the day and run.

3. He should really ditch that accent

The movie needs some humor. But not too much humor. And Chris Pratt trying to do the Harrison Ford drawl would just have me in a fit of giggles the whole movie. And while that would make for some great memes, it wouldn’t really make for an iconic film.

More: 20 Celebrity HILFs of the year (husbands we’d like to you-know-what)

4. A German enemy no more

The movie really banked on the World War II time period to make their Nazi baddies even badder. But now that we’ve moved on from that shady time in history to some new villains around the world, Disney will need to eye a new foe.

Of course, some things are bound to stay the same.

And we’re going to go ahead and say he should definitely keep the glasses. 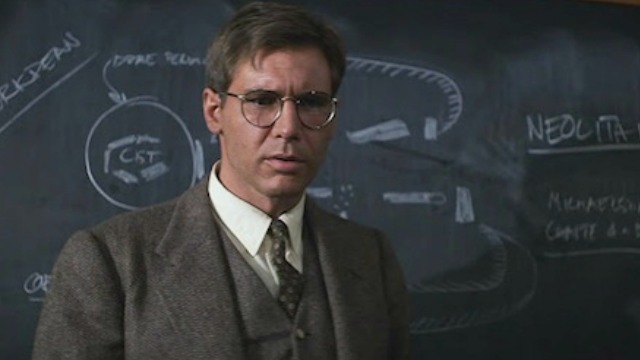 Would you watch an Indiana Jones reboot with Chris Pratt in the lead?