Just a few days after announcing the first batch of performers, like Ariana Grande and AC/DC, the folks over at the Grammys have now hinted at another huge name with just one tweet and eight little emojis.

More: Rihanna’s heartbreak revealed and it’s not over Chris Brown

On Wednesday morning, Jan. 21, the person in charge of the official Grammys Twitter account sent out a message with just eight anchors, and it could only mean one thing: Rihanna is on her way. Not only does the bad gal rep her fan base with the term “Rihanna Navy,” but the number of anchors is significant because she’s set to release her eighth studio album sometime this year. Mystery solved! You’ll have to be a little more subtle next time, Grammy officials. 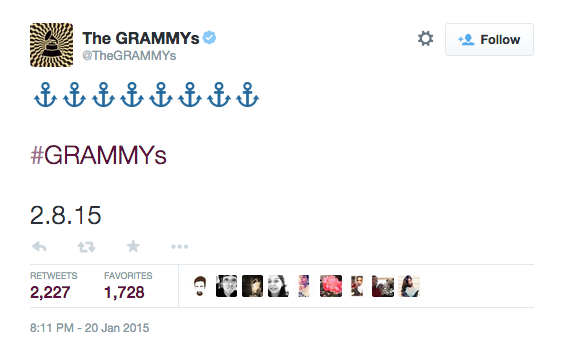 Rihanna has been missing in action for quite some time now. Aside from posting small (and I mean small) glimpses of new music on her Instagram, the thirst for some new material from the pop star is extreme. Fans have been clinging to every single tidbit they could find regarding new tunes in recent months, including submissions on songwriting databases. Among some of the latest song titles that have been registered under Rihanna’s name are “Kiss It Better,” “A Night” and “Burritos.”

More: Brad Pitt wants Rihanna to get a job and stop being so lazy (VIDEO)

We’re only a few weeks away from the industry award ceremony, which airs Feb. 8. However, in the meantime, fans can begin hyping up the list of confirmed performers, which includes Madonna, Ed Sheeran, Eric Church and Sam Smith.

Are you excited for Rihanna’s return? If not, tell us who you’re pumped to see perform at the Grammys.