It looked like your run-of-the-mill tuxedo, until Selma star David Oyelowo opened his jacket to reveal a touching reminder of what the movie was all about.

Oyelowo, whose performance as civil rights leader Martin Luther King Jr. was snubbed by the Academy Awards (along with every other black performer who made a movie last year), donned a classic black tux sans tie for last night’s Critic’s Choice Awards, but when he opened up his jacket, a lovely tribute was revealed. 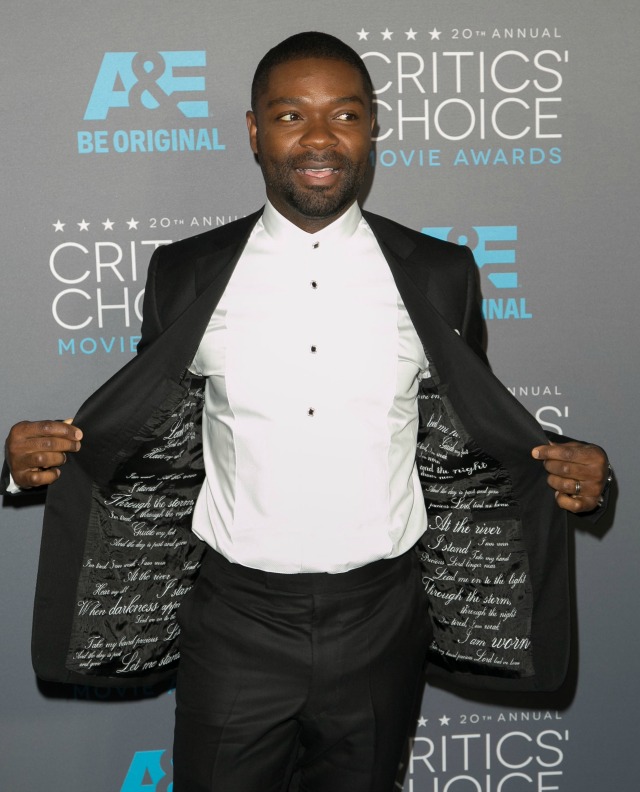 More: 2 Reasons why Selma‘s Ava DuVernay may have been snubbed by the Academy

The lining of the jacket was custom-made and printed with the words to the hymn “Take My Hand, Precious Lord,” which was King’s favorite gospel song. Making it even more special was the fact that the awards were held on what would have been King’s 86th birthday.

Unfortunately, it was not enough of a charm to land him a trophy. He lost to Michael Keaton for Birdman in the Actor in a Leading Role category.

“These things happen,” he told Entertainment Tonight. “The prize for me is that this film is resonating so beautifully with audiences.”

When asked by ET about the lack of diversity in this year’s Oscar race, he said, “We’re just going to keep plugging away. The only way to put a dent in the very real fact that there is a disproportionate amount of people who do not look like me doing what I do is something that I’m just going to fight by doing the best I can with the roles I get.”