If you’re struggling to keep up with all the premiere dates of your favorite returning shows and can’t seem to remember when the new shows you want to check out will make their debut, then this TV schedule is for you. 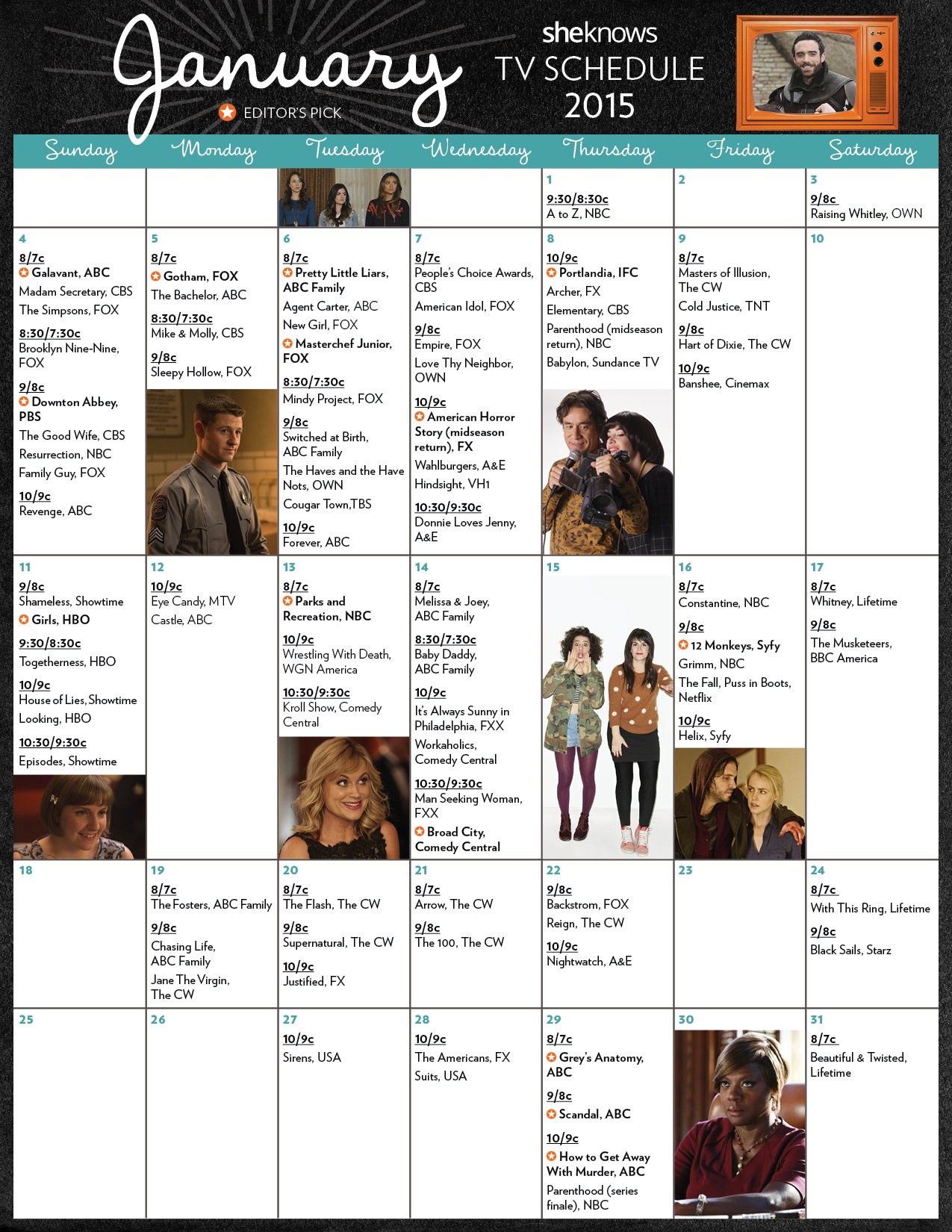 Highlights: Jan. 29 is going to be a very busy day for us. We’ve already organized to take the day off work, so we have adequate time to prepare for the elation that is the return of TGIT. Grey’s Anatomy, Scandal and How to Get Away With Murder all answered a bunch of questions we had in their fall finales and then promptly gave us cause to ask a whole lot more questions. It was cliffhanger-central, and we can’t wait to finally get back up off that cliff. 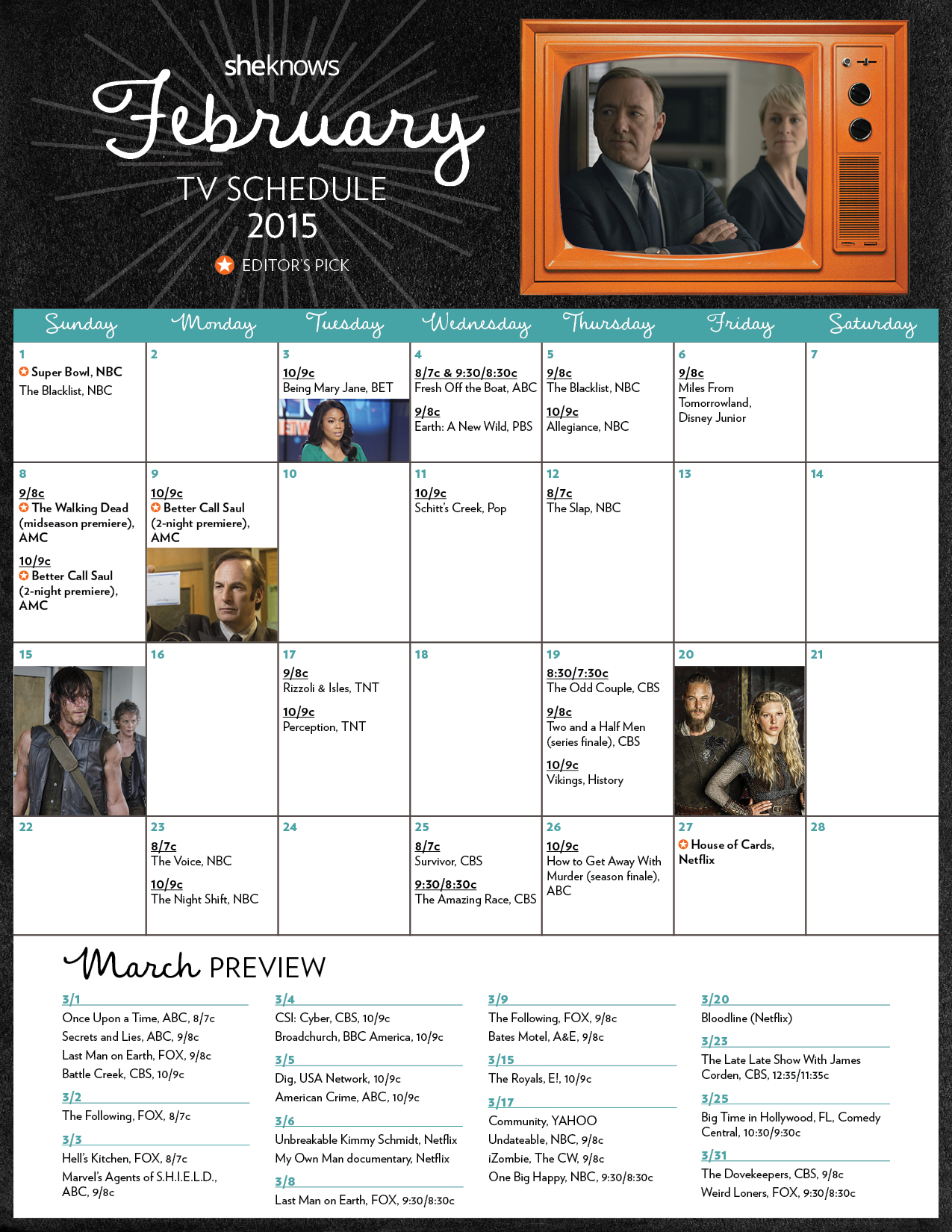 Highlights: February is a very busy month for us where new shows are concerned. First, the Breaking Bad spin-off, Better Call Saul, premieres over two nights on Feb. 8 and 9, and we’ll obviously be tuning in and hoping it fills the Walter White-size hole in our hearts. Matthew Perry’s new show, The Odd Couple, premieres on CBS on Feb. 19, and although the odd couple in question is not Monica Geller and Chandler Bing, we love Perry and are keen to support anything he does. The final new show to pique our interest this month is The Slap, which premieres Feb. 12 on NBC. This show is based on an Australian series, which was based on a book, and examines what happens after a child is slapped at a family barbecue by someone who is not the child’s parent.

In returning shows news, the midseason premiere of The Walking Dead will hit our screens on Feb. 8, and we would pretty much have to actually be dead to miss that. 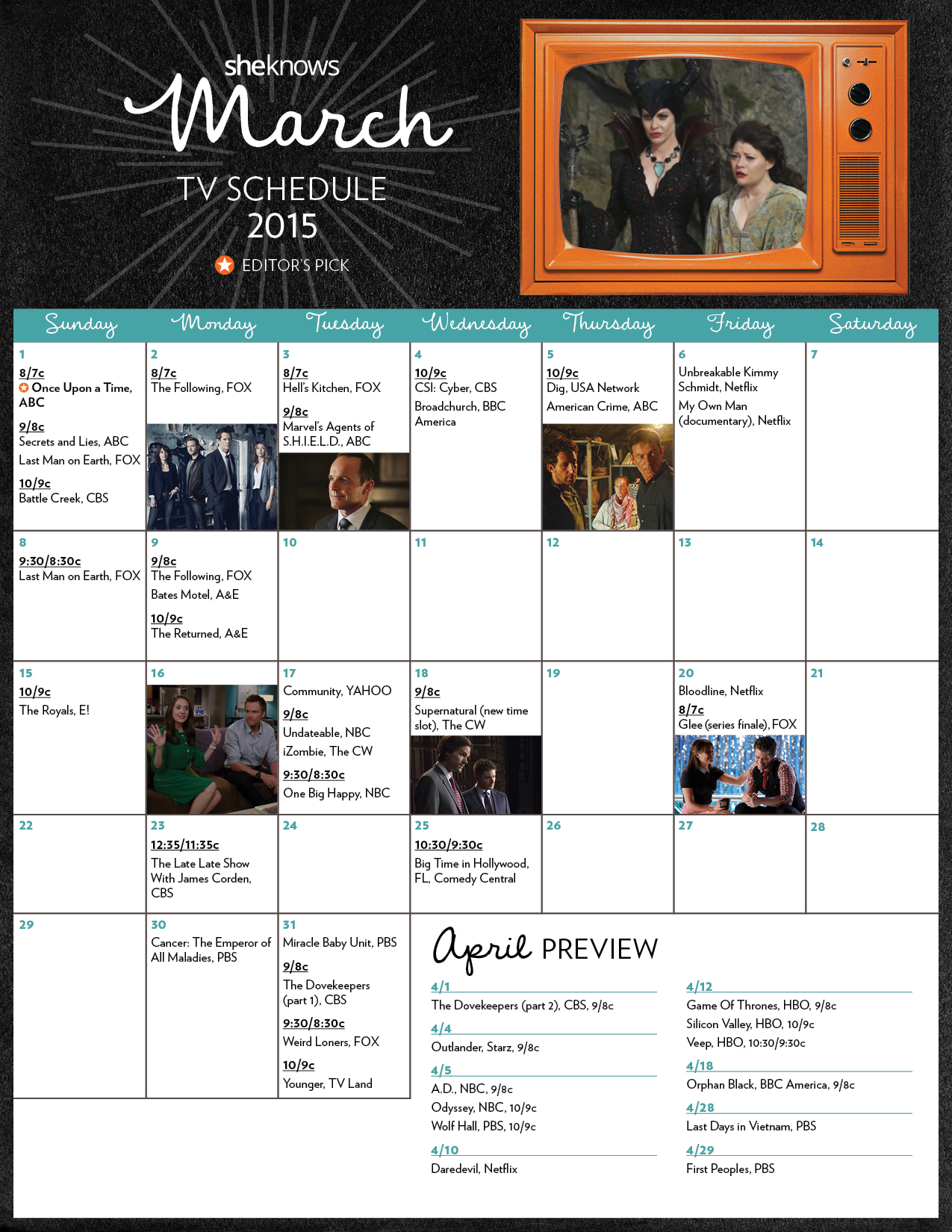 Highlights: Tina Fey’s new show, Unbreakable Kimmy Schmidt, premieres on Netflix on March 6, and we will be all over that because we can’t help but pick up whatever Tina is putting down. Also on the March new show horizon is Younger, which makes its debut March 31 on TV Land. It features Sutton Foster and Hilary Duff, and that should be all you need to know to be on board with this new show. James Corden will make his long-awaited debut on The Late Late Show, and this guy is just so gosh-darn cute and adorable that we want to marry him, so we’ll obviously be watching that.

In bittersweet news, Glee will air its series finale on March 20. Although Glee hasn’t been good in years, we’ll still tune in to say goodbye to our once-beloved show. It seems only right.

More: Confession — I loved Glee, but it should have ended three seasons ago

The March calendar also gives us a little peek into what to expect in April. With the return of Outlander and Game of Thrones on April 4 and 12, respectively, it’s comforting to know we’ll have glorious television to watch well into the middle of 2015.