Stand-up comedian Cameron Esposito is one of the hardest-working women in comedy. From writing her first book to appearing on a new Fox TV show, to performing for charity, we’re confident that if you don’t already know her name, you soon will.

If you were a fan of the Chelsea Handler show, Chelsea Lately, it’s likely you’re already a fan of Cameron Esposito, who was a regular panelist on the popular late-night show. If you’re just discovering Esposito for the first time, you’re going to have a lot of upcoming opportunities to get to know her.

Originally from Chicago, we were surprised to hear that this funny gal started her career as a ringmaster in a circus. “It was an awesome job, I loved it. It’s so much fun to hang out with people who are so dedicated to their craft — when you hang out with someone who does the flying trapeze for a living, you can really see all the hours of work they put into it. And their bodies are insane.”

As much as she liked her job touring with the circus, her true dream was to be a stand-up comedian and write her own material, something Esposito said is extremely demanding work.

“There’s an interesting disconnect between the preparation for stand-up and what stand-up looks like. Doing it well should look like you’ve never said these words before. Because the audience is often thinking, ‘God, how does this person have the natural ability to talk jokes for an hour?’ But it’s all crafted over years.”

While comedy has traditionally been a men’s game, more and more women like Melissa McCarthy and Tina Fey are finally becoming big players. “There’s more men involved in comedy than women. It’s a numbers game. There’s also more male audience members in comedy — that’s my on-the-ground experience going to shows. But I do think there’s been a massive change.”

We had to ask Esposito why she thinks forging a career in comedy is so challenging for women. She said she thinks it’s partly cultural.

“Women are often more encouraged to be listeners or to be helpful, or to be accommodating, and not taught to be leaders or be well-spoken or prove their point. Of course, that’s what a stand-up is: A well-spoken leader who proves their point. I think that women have a little bit of an adjustment to go through in order to be ready to be on stage.

“You can do it yourself, it can be an adult adjustment. Or it can be something that happens because of your personality type. If you’ve never seen someone who looks like you do something, it becomes very hard to imagine yourself doing that. So, the best way to get more women started in comedy is to just keep doing our jobs,” she said, adding that, “It’s awesome that Barack Obama is president; it’s a similar thing.”

Esposito recently sold her first book idea, but claimed, “I never thought I would be a writer.” The book deal is so new, she couldn’t share any of the details with us yet, but she did say it would be autobiographical in nature. 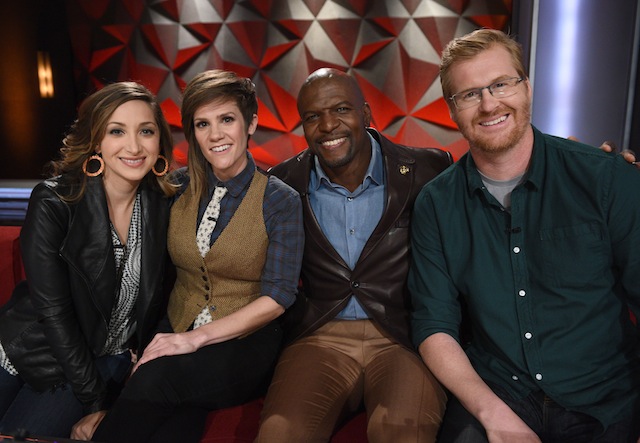 After recently appearing on the IFC show Maron with Marc Maron, Esposito can soon be seen on Fox’s World’s Funniest Fails, hosted by Brooklyn Nine-Nine star Terry Crews, where a panel of celebrities and comedians analyze “epic fail” videos.