Fans may have gotten a Golden Globes spoiler today when the award show website appeared to reveal two Best Picture winners. But is the info legit? 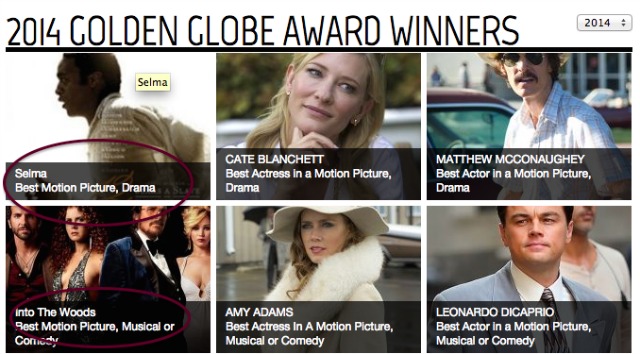 It looks like a Golden Globes web developer was probably doing some mock-ups ahead of Sunday’s show and either was just testing something out with randomly selected nominees, or we’ve just been given a major heads-up that Selma will take home the win for Best Motion Picture, Drama, and Into The Woods for Best Motion Picture, Comedy. Whatever happened, it was obviously a major oops — not only would the Globes never want to leak the winners early, but the photos listed with each were still from the 2014 winners (12 Years a Slave and American Hustle, respectively).

The Golden Globes team eventually caught wind of the big boo-boo and changed the site back to list only the 2014 winners, but it does make you wonder… While Selma is a favorite to take the win not just at the Globes but the Oscars as well, could Into The Woods really beat out category favorite Birdman?