When you first set eyes on the trailer for Jennifer Lopez’s new smoldering thriller, The Boy Next Door, you were likely left asking yourself: “Who is that minx-like young boy playing Lopez’s young villain-lover?” Let’s get to know Ryan Guzman, the heartthrob from The Boy Next Door a little better.

Playing the role of Noah Sandborn, a student who becomes malignantly obsessed with his teacher after a one-night stand, Guzman plays an extremely sexy and convincing troublemaker in this highly anticipated film (hitting theaters Jan. 23). However, he isn’t anything like his on-screen doppelganger. Here are six things you need to know about Ryan Guzman, your new celebrity crush.

It’s always exciting to meet a leftie! Growing up in Sacramento, Guzman played baseball all through high school and was ranked one of the top left-handed pitchers in California. He continued to play ball into college, although an injury cut his career short. However, he still remains a tried-and-true left-handed individual.

2. He’s never played a role like his Boy Next Door Character

In that ultra-steamy love scene that we’re all looking forward to, you get to see more of Guzman in The Boy Next Door than you ever have before. Like, literally. But skin-baring aside, this cutie typically gets cast for the “happy-go-lucky” guy rather than the deranged ex-lover. His role of Sean, the good guy, in Step Up Revolution, and the character of Jake in Pretty Little Liars couldn’t be further from the psychopathic (albeit, hunky) Noah Sandborn. Gotta love the way acting pushes decadent slices of man cake out of their comfort zones, right?

3. He’s super-close with his family

Given that Guzman is a nice Latin boy, it makes sense that he comes from a pretty tight-knit family. At least, that’s what we can glean from his holiday rituals. When asked if he had any holiday traditions in a 2013 interview, Guzman said that spending time with family matters most. “Really, we just focus on getting together. My family makes tamales and everybody gets together at my mom and dad’s house. We catch each other up on stories.” Quick question: How do you get invited home for this family soiree?

4. He began his career as a model

Before crossing over into acting, Guzman was a prominent model and appeared in campaigns for Abercrombie & Fitch and Reebok. While the trade undoubtedly involved a whole lot of glamour, the profession wasn’t without its cringe-worthy moments. In an interview from 2012, he recalls a hilarious fashion mishap involving some too-tight pants at a show. “I bent over to get something and they split from my knee all the way up to my butt. I was devastated for the longest time,” Guzman said, “They had to find someone to tailor it right away.” Stars: They’re just like us!

5. He was this close to being Christian Grey

Ay caramba! We’re sweating just thinking about it. Guzman auditioned for the central role in the screen adaptation of Fifty Shades of Grey. The hottie actor spoke with excitement in an interview about the prospect of getting the role. “I know it’s a little risqué, but I’m starting to get into Fifty Shades of Grey,” said Guzman, “I’m going to start reading that one next because I’m kinda thinking I might like to go out for this Christian Grey role.” In the end, scheduling issues unfortunately got in the way, and the part went to Jamie Dornan. 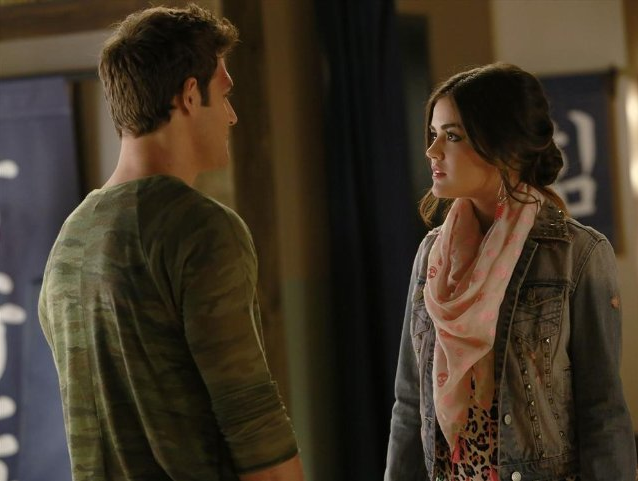 Guzman had a short stint as Aria’s love interest on Pretty Little Liars. We were actually hoping Aria might find love in the boxing gym (Guzman played a boxing trainer who could have definitely helped protect her against the wrath of “A”), but alas, she ended up running back to Ezra. Either way, it was nice to see a new face on the show. We were pretty bummed when he announced he wouldn’t be returning.

Luckily, now we can all catch Guzman in The Boy Next Door on Jan. 23!

This post was sponsored by The Boy Next Door.