I’m obsessed with Sherlock on the BBC, so over the past few weeks, you can imagine my concern over Benedict Cumberbatch’s short hair. I mean, who is Sherlock without those jet-black curls?

There has been much speculation online among hair stylists (I’m serious) who say it would be possible to comb Benedict’s hair forward to get the proper Sherlock ‘do, but questions remained. Apparently, our questions were in vain, because according to photos released from the set today, his hair is the least of our concerns. (And whoever thought I’d say something like that?)

More: Benedict Cumberbatch talking about sex is what (wet) dreams are made of

We should have been prepared. On Nov. 25, the show’s producer, Sue Vertue, released the following image on Twitter as a teaser for the Sherlock Christmas special:

Talk about wrong hair! Wrong costumes! Wrong mustache, Watson! All in all, wrong time period. The BBC’s revamped version of Arthur Conan Doyle’s “consulting detective” is set in modern times, so what’s the deal with this flashback fashion?

Additional pictures were leaked from the set today. Check ’em out: 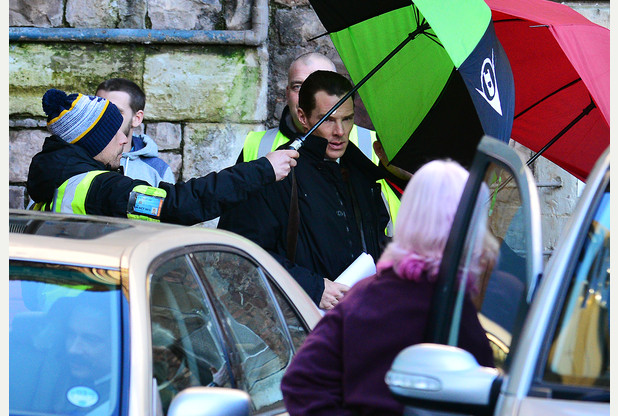 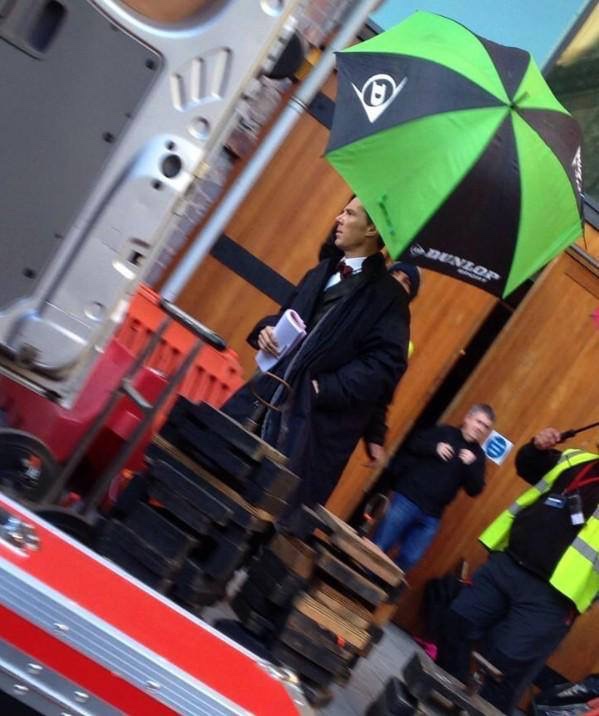 OK, so Benedict’s hair is black. Check. However, he’s totally got the Star Trek Into Darkness Khan look. He’s also wearing a bow tie. A bow tie! You might be aware that one of the creators of Sherlock is none other than Doctor Who madman, Steven Moffat. The bow tie was made “cool” by Matt Smith as the 11th Doctor. Worlds are colliding, people! What does it mean?

More: Doctor Who and Sherlock fans rejoice, the BBC just made your year

Here is what we know from the show’s creators (although you should never believe them; they lie). Warning: Spoilers…

1. There will be a Sherlock Christmas special in December of 2015 that will apparently solve the mystery of Jim Moriarty’s return from the dead, as foreshadowed by the closing episode of Season 3. 2. In early 2016, we’ll get three additional episodes. A couple things we’re expecting: Baby Watson, the return of Irene Adler and maybe a major character death.

It looks to me like the Christmas special is going to be some kind of crazy time travel bit. Maybe a lengthy dream sequence? Although that seems totally played out. Time travel must be the answer, which means a Doctor Who crossover. Right? In all honesty, there’s no way Moffat and evil co-conspirator, Mark Gatiss, would let that happen, but why the bow tie? Why do they tease us this way?

We know the Sherlock writers are evil geniuses, what with sort of killing off Sherlock in Season 2 and the reincarnation of the best villain ever under the guise of Andrew Scott at the end of Season 3. So what’s the deal with the Victorian garb? And Martin Freeman’s mustache?

All we know for sure? From the mouth of Moffat himself: “I do think our plan is devastating. We’ve practically reduced our cast to tears telling them the plan.” Oh, fabulous.

We’ll have to wait… and wait… and see. For Benedict, filming must be anything but relaxing, considering he has the Golden Globes to attend on Sunday and a wedding to plan and Hamlet to play in the fall and, well, yeah, the man is busy. If anyone needs a time machine, it’s him. Paging Doctor Who. Will Doctor Who please come to Baker Street? We hope so …