Teresa Giudice took her family on a fabulous vacation before she has to report to jail next week, and she ran into a few familiar faces on the slopes.

At this time next week, she’ll be a jailbird, but right now, Teresa Giudice is a completely different species altogether: a snow bunny.

The reality star and convicted felon took her family on a fabulous ski vacation for the holidays as one last hurrah before she is due to report to jail on Jan. 5 after pleading guilty to 41 counts of fraud.

The family spent several days at the Crystal Springs Resort and Spa close to home in New Jersey before Teresa is forced to submit to her own personal episode of Orange Is the New Black.

“Everyone had a great time,” a source told E! News. “Again, these last few days are all about family and close friends for Teresa.”

While at the resort, Giudice ran into her RHONJ costars, Teresa Aprea and Nicole Napolitano, but it was a pure coincidence — definitely not being filmed for the show. 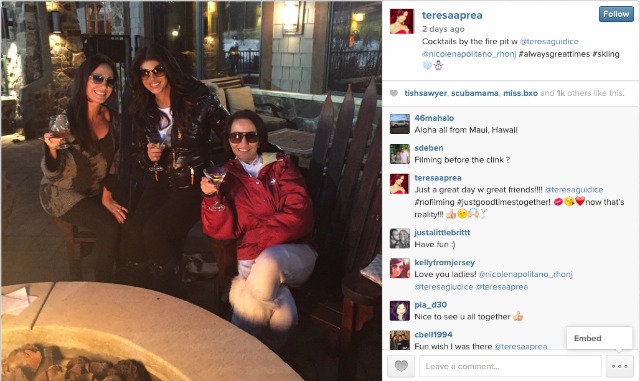 Teresa Giudice is set to serve 15 months in a federal prison. Her husband, Joe, was sentenced to 41 months, which he will begin serving when Teresa finishes her time so their children always have one parent available.