Let’s face it: if you haven’t seen The Interview, you’re not missing much.

But the movie, which became a nationwide talking point when terrorist threats caused Sony to cancel its premiere and then release it to select theaters and on-demand sites, actually has a few funny scenes — or, at least, scenes that people are going to be talking about. If you want to be a part of the conversation without wasting hours of your life watching a pretty terrible movie, you’re in luck — I wasted hours of my life so you wouldn’t have to. Here are The Interview‘s funny, surprising and gross moments that are sure to be talked about in the office on Monday.

By now, you’ve surely heard of the opening scene, in which James Franco’s character, Dave Skylark, is interviewing rapper Eminem as he comes out on live TV. It actually gave me really high hopes for the movie, because it happens in the first five minutes and it is hilarious. If you haven’t already, check it out below:

2. “Honey-potting” is probably a thing people will say now

In The Interview, “honey-potting” is what Lizzy Caplan’s sexy spy character does to Skylark. Basically, it’s just using your attractiveness to get a guy to agree to do something for you, then revealing that you’re actually super-intelligent and you planned everything out for him. Casual sexism FTW. Anyway, people are probably going to insist on using this term, so now you’ll at least know what it means.

3. More sexism, plus racism and homophobia

I guess it should come as no surprise that a lot of the humor in The Interview is pretty low-brow — “honey-potting” isn’t even close to the most sexist joke. Throw in some serious racism, body-shaming, homophobia and poor taste, and you’ve pretty much got The Interview in a nutshell. There’s a running joke through the whole movie that margaritas are “gay,” plus tons of other off-color references to gay sex. Skylark’s insistence that malnutrition and poverty aren’t problems in North Korea is based on having seen one overweight child (and he makes a ton of mean jokes about the kid’s weight). The fake “Engrish” accents the Americans use to make fun of Koreans and the movie’s attempts to make light of serious social issues in North Korea, including rampant poverty, starvation and human rights violations, make for a whole movie full of disappointing jokes.

That much being said, not all the gags are terrible. Kim Jong-un’s love for Katy Perry is pretty hilarious, and a scene where he and Skylark rock out to “Firework” in Kim’s personal tank definitely had me giggling. You can catch the scene at the end of this trailer:

5. The cutest puppy of all time

OMG, that puppy! In case you missed it in the trailer above, there’s a close-up below. That is, without a doubt, the cutest puppy I’ve ever seen. In my life. 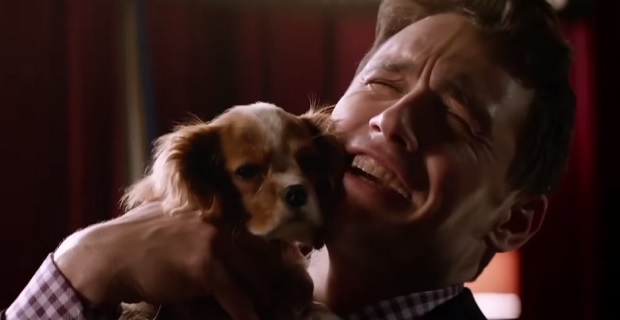 Bonus: The Interview is a huge hit in China

If you don’t care about knowing what happens in the movie but still want to be in the loop, here’s a fun fact to share at the water cooler: The Interview is absolutely huge in China. The New York Times reports that more than 300,000 people have pirated the film in China, and the online reviews have been bafflingly positive.

“Perfect, the greatest film in history, all hail Sony,” read one online comment. “Their ability to amuse is out of this galaxy,” another reviewer wrote of Franco and Rogen.

Although China is North Korea’s only major ally, many ordinary Chinese citizens have concerns about their government being so friendly with the North Korean regime — one reason people in China may be so taken with such a mediocre movie, the Times reports.