We all know that Hollywood typically writes more interesting characters for men than it does for women, so we feel it’s really important to celebrate that narrow margin of roles that show women as complicated, funny and inspiring all at the same time. 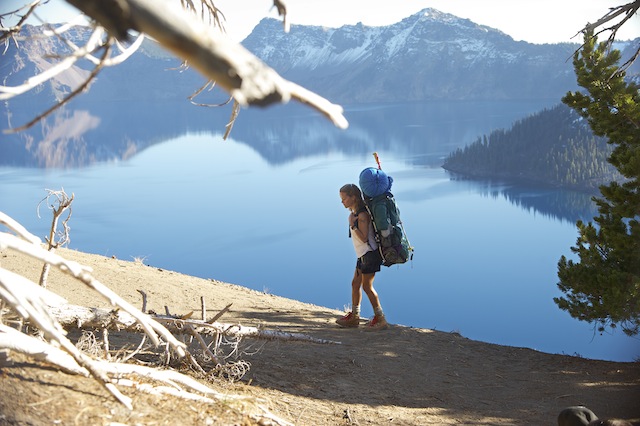 In Wild, Reese Witherspoon plays Cheryl Strayed, a woman mourning for her mother and dealing with a terrible breakup.
Why she’s strong: Witherspoon exposes more than her naked body in the film. Her character’s in so much emotional pain, she even turns to heroin and risky sexual escapades with strangers to dull the hurt. When none of it works, she decides to go on one long walk — 1,100 miles of the Pacific Crest Trail, to be exact. We love to see Witherspoon stepping out of her rom-com comfort zone and tackling such a meaty role.
More: 9 Ways Wild is the most female-empowering film of the year

2. Diana Bang as Sook in The Interview 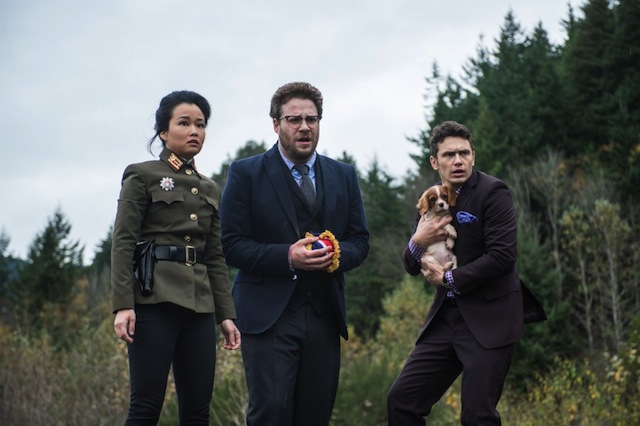 Image: Sony
Probably the most internationally controversial film in years, The Interview gets much of its humor from satirizing the North Korean government. Canadian actress Diana Bang plays Sook, the assistant to Kim Jong Un (Randall Park).
Why she’s fearless: Diana Bang finds a way to be funny and sexy while invoking the ire of a country with nuclear weapons. We think that’s pretty ballsy.

3. Keira Knightley as Joan Clarke In The Imitation Game 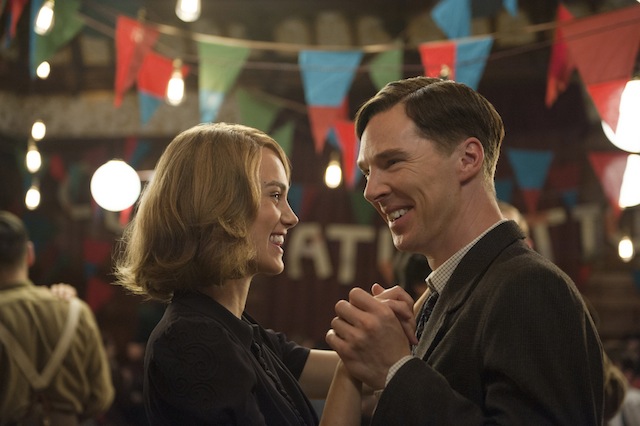 Image: The Weinstein Co.
Puzzle-solver Jane Clarke (Keira Knightley) falls for computer pioneer and colleague Alan Turing (Benedict Cumberbatch) during World War II.
Why she’s inspiring: While Joan knows Alan is gay, she loves him so much, she agrees to marry him anyway. A lesser actress wouldn’t have been able to make this character relatable to a modern audience, but Knightley has so much emotional depth, she’s able to help us understand why this woman was willing to make such a big sacrifice.

4. Felicity Jones as Jane Hawking in The Theory of Everything 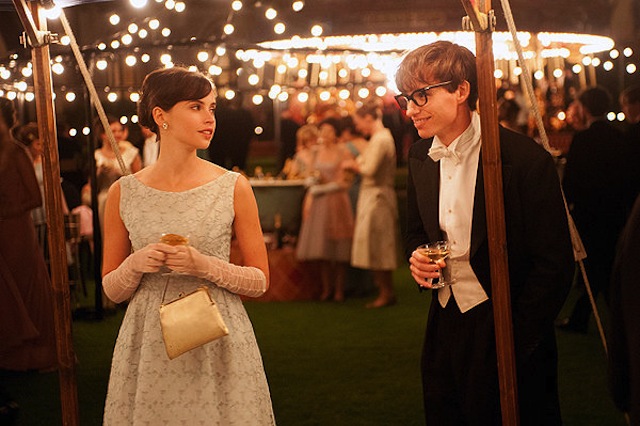 Image: Focus Features
This romantic drama about the marriage between physicist Stephen Hawking (Eddie Redmayne) and his doting wife Jane (Felicity Jones) explores the stress on a family when Stephen is diagnosed with ALS and given two years to live.
Why she’s strong: The Hawkings’ marriage ended in divorce, despite the love and children Stephen and Jane shared. This movie delves deep into two well-intentioned, yet flawed people. Things get messy, and Jones isn’t afraid to reveal that side of herself. She put a human face on a woman who could have been hailed as a one-dimensional saint.

5. Shailene Woodley as Hazel in The Fault in Our Stars 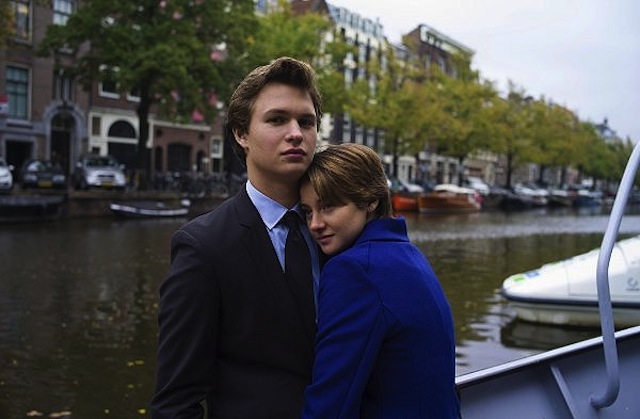 Image: 20th Century Fox
Another heart-piercing romantic drama in which the lovers don’t end up together, Fault explores two teens’ struggle to love each other despite having cancer.
Why she’s fearless: Shailene Woodley plays a girl who’s physically frail, has oxygen tubes in her nose and can barely climb the stairs at the Anne Frank house in Amsterdam — not exactly the sexiest role in Hollywood. Instead, Woodley relies on her huge, hopeful heart to make us love Hazel.

6. Kelly Reilly as Fiona in Calvary 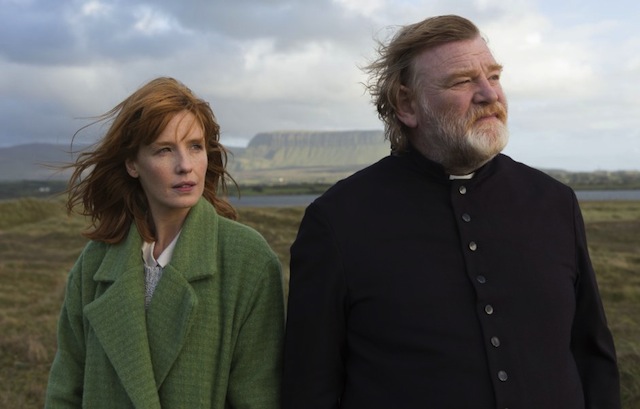 Image: Fox Searchlight
We’ve heard a lot about some very bad Catholic priests over the last few years, but Calvary is about Father James (Brendon Gleeson), a very noble, upstanding priest. While Father James struggles with the injustices of a church plagued by a child abuse scandal, he also tries desperately to reconnect with his only daughter, Fiona (Kelly Reilly).
Why she’s inspiring: Irish actress Kelly Reilly has no trouble exposing her vulnerable side, dealing with her character’s bad relationship choices, suicide attempt and troubled relationship with her dad. Reilly’s portrayal of Fiona is so emotionally naked, we feel like we can see inside her soul.

7. Sheila Vand as The Girl in A Girl Walks Home Alone at Night 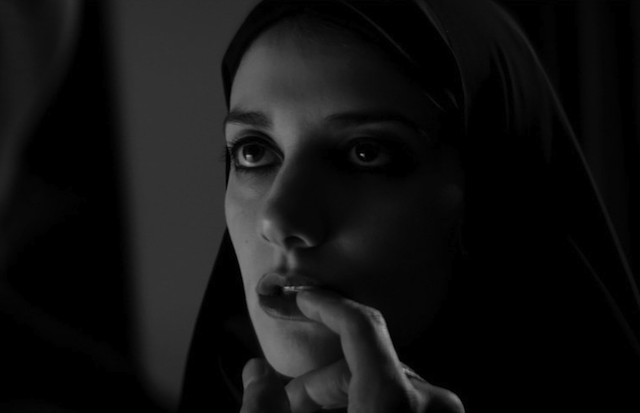 Image: Kino Lorber
This starkly beautiful yet bizarre Iranian vampire Western stars Shelia Vand as The Girl, a beautiful vampire who stalks the residents of the fabled Bad City after dark.
Why she’s thrilling: Though the film is an electric mashup of styles, Vand is gorgeous in the darkness and the light and makes us smile numerous times despite her character’s blood-sucking nature. This is a fresh, fun performance. 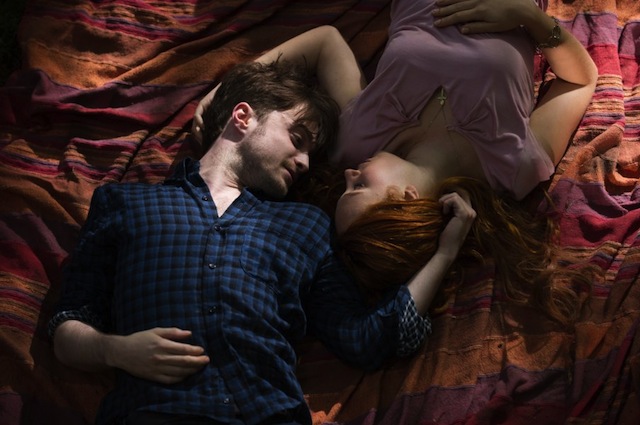 Image: Radius/TWC
This modern but twisted fairytale for adults stars Daniel Radcliffe as Ig, a young man who sprouts horns from his head after his girlfriend Merrin’s (Juno Temple) murder.
Why she’s disturbing: Juno Temple embraces the dark side of human nature as the victim of male rage. At one point in the film, Merrin lies naked with numerous real snakes slithering over her bare body. If that’s not freaky, we don’t know what is.
More: 4 Things Juno Temple just told us about Horns co-star Daniel Radcliffe

9. Lina Esco as With in Free the Nipple 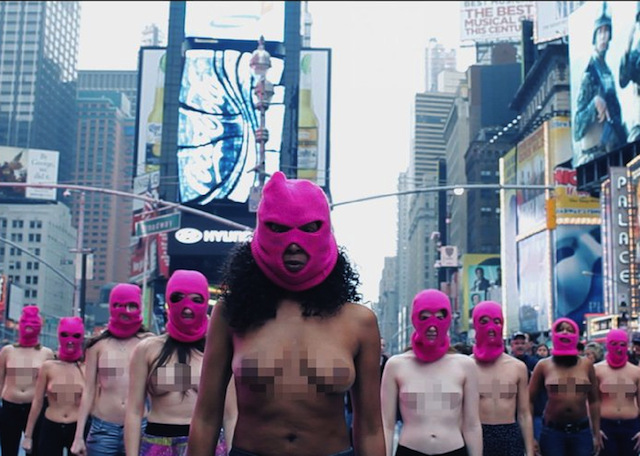 Image: IFC Films
Not only did Lina Esco star in this envelope-pushing film about young women fighting for equal rights, she directed it as well.
Why she’s fearless: While it’s legal for women to expose their breasts in New York City, Esco wasn’t able to obtain permits to film the naked ladies. In order to get the shots of the women protesting topless, Esco shot the scenes guerilla-style and risked getting her entire crew in trouble with the law. We think her risk paid off.
More: Free the Nipple‘s director shares her fears about going topless 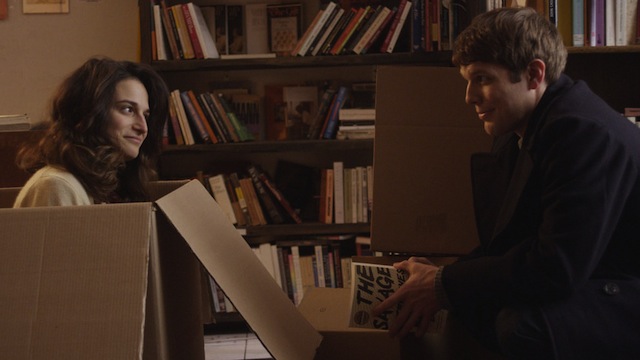 Image: A24
This is the messy journey of a young comedienne, Donna (Jenny Slate), who discovers she’s pregnant after a one-night stand.
Why she’s strong: A comedy dealing with abortion sounds like an odd combination of topics, but thanks to Jenny Slate’s comedic chops, it works in a surprising and modern way. We love seeing women deal with difficult issues on screen.

11. Uzo Aduba as Suzanne Warren in Orange Is the New Black 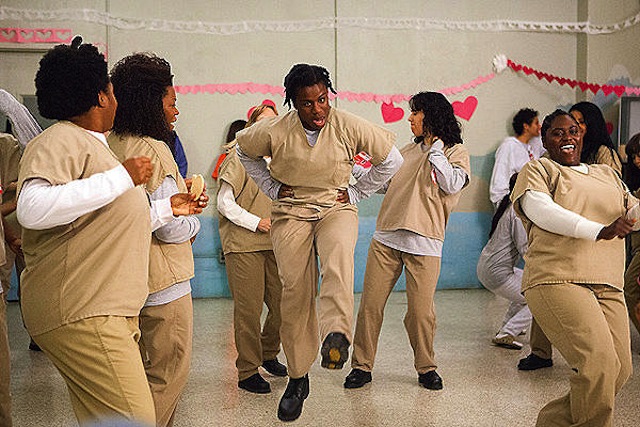 Image: Netflix
The premise of the show is simple — disparate women struggling to find their own identities despite doing hard time in prison.
Why she’s thrilling: Uzo Aduba as Suzanne Warren, aka “Crazy Eyes,” is a walking poem about the beauty and sadness of life. From reciting Shakespeare to acting out physical violence, Crazy Eyes is searching for love in the extreme environment of incarceration. She’s a metaphor for so many of our lives.

12. Cara Seymour as Sister Harriet in The Knick 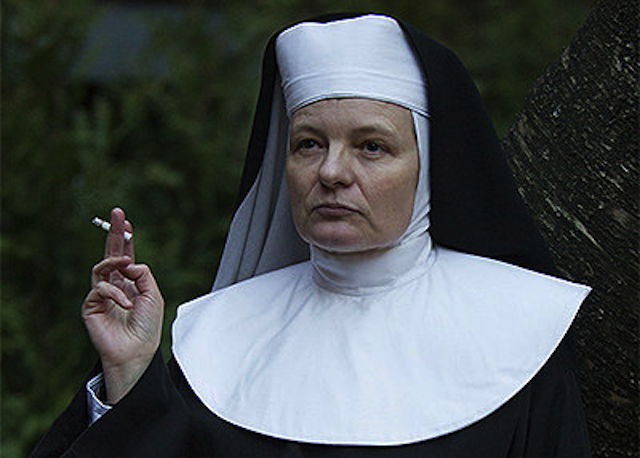 Image: Cinemax
The Knick reveals the less-than-perfect health care available in New York City in the year 1900.
Why she’s fearless: The above photo of Cara Seymour as Sister Harriet smoking a cigarette says it all: Sister Harriet has committed her life to the Catholic Church, but she’s going to do things according to her own set of rules, even if it means being the most trusted abortionist in the city. Talk about brave — we can only imagine what her confessions must be like.
More: Could The Knick be the new Breaking Bad? Golden Globes say yes

13. Katey Sagal as Gemma Teller Morrow in Sons of Anarchy 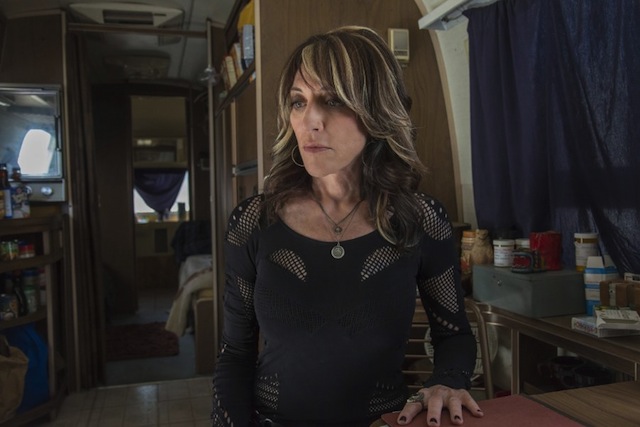 Image: FX Network
Though this show — depicting the story of Hamlet set in a motorcycle gang — has come to an end, Katey Sagal has proven she’s as talented as any actress on TV.
Why she’s disturbing: Sagal as Gemma never followed her motherly conscience. She always let her selfish need for control guide her actions. Was her character likeable? That’s up for debate, but we do know she paid the ultimate price for her sins.

14. Annet Mahendru as Nina Sergeevna in The Americans 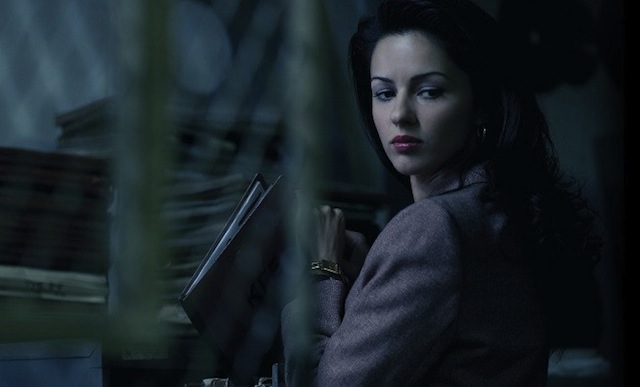 Image: FX Network
The Americans is actually about Soviet spies (Keri Russell, Matthew Rhys) attempting to infiltrate the American government in the 1980s.
Why she’s thrilling: While the character of Nina (Annet Mahendru) started off as just an office worker in the Soviet embassy, Nina has become the soul of the show. Like the Soviet Union, Nina is tragic, yet beautiful; dangerous, yet strong; desperate, yet dignified. Any woman who can steal a show from Keri Russell has our respect.

15. Sadie Calvano as Violet in Mom 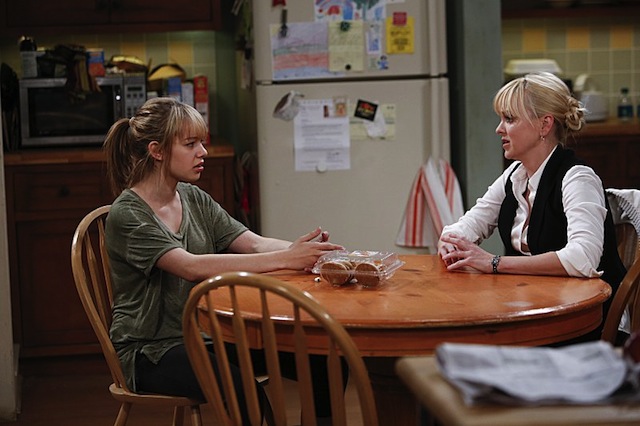 Image: CBS
Mom stars Anna Farris as a recently sober single mom trying to make the best life she can for her two kids, including her teen daughter Violet (Sadie Calvano), who’s recently given up her own baby for adoption.
Why she’s inspiring: To watch a teen girl go through a pregnancy and decide to give up her baby, knowing it’s for the best, is gut-wrenching. But Calvano openly plays the struggle inside her big teen heart, one intense emotion at a time. While most teens on sitcoms usually come off as bratty, Calvano manages to make Violet complicated while being a role model for other teens who may be dealing with similar issues, all while never denying the comedic thread of the show. We can’t wait to see what your career has in store, Sadie!
What female performances shocked or inspired you in 2014? Share them in the comments section below.