Glee just released their newest promo for the final season, featuring Lea Michele’s powerhouse vocals for “Let it Go,” the Frozen song Idina Menzel originated, and we couldn’t help but be reminded of just how similar these two leading ladies are.

And it isn’t just their strikingly similar looks. Menzel and Michele also have a lot of personality and career traits in common, too.

1. They both come from Broadway

Menzel started singing at age 15, and her career quickly took off from there. She has had many notable roles throughout her career, including Maureen Johnson in Rent, Sheila in Hair and Elphaba in Wicked.

Michele got her Broadway start at a much younger age, playing Young Cosette in Les Misérables at age 8. Her most notable role was as Wendla Bergmann in Spring Awakening.

Ryan Murphy clearly saw the similarities between the two because he cast Menzel as Michele’s mom on Glee after Menzel reached out to the creator because she thought the pairing would be a perfect fit.

3. They can both belt out a ballad

As crazy talented sopranos, these ladies don’t hold back. And they sing a lot of the same tunes as well: “Defying Gravity” from Wicked, “Don’t Rain On My Parade” from Funny Girl and “Take Me or Leave Me” from Rent, just to name a few.

4. They look alike… a lot alike 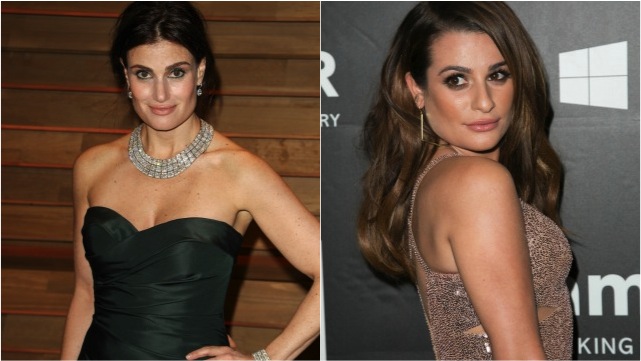 5. They are both from New York

Menzel was born in Syosset, New York, and grew up there.

More: Lea Michele gets dis of a lifetime from Jessica Lange

Michele was born in the Bronx, New York, and though her family moved to New Jersey after a few years, they stayed in the area and even rented a Manhattan apartment for when Michele was performing on Broadway.

6. Their albums both charted on Billboard this year

Michele released her first solo album Louder in March 2014. It debuted at No. 4 on the Billboard 200 chart.

Menzel also released an album this year, her first in six years, called Holiday Wishes. It reached No. 10 on the Billboard 200 chart.

7. They both dreamed a dream

8. They both work closely with charities

Menzel supports arts education through her organization A BroaderWay Foundation and LGBT rights through organizations like The Trevor Project and the NOH8 Campaign.

Menzel played Fanny Brice in the Funny Girl concert in 2002, a role that was originally played by Barbra Streisand in the 1968 movie.

Michele has been vocal about her love of Barbra Streisand. That love even translates to her character Rachel Barry in Glee. There are even talks that Murphy and Michele want to bring Funny Girl back to the stage together, with Michele in the lead.

10. They’ve each received a ton of accolades

Menzel won the Tony for Best Performance by an Actress in a Leading Role in a Musical in 2004 for her performance as Elphaba in the Broadway rendition of Wicked. She has been nominated for her roles in Rent and If/Then. Her song “Let It Go” from Frozen also won the 2014 Academy Award for Best Original Song.

Michele, on the other hand, received two Golden Globe Award nominations for Best Actress in a TV Series, Musical or Comedy for her role on Glee. That role also earned her an Emmy Award nomination. She won a Satellite Award, a Screen Actors Guild Award and three People’s Choice Awards.

11. They are both recovering from tough relationship challenges

Menzel split with her husband of 10 years, Taye Diggs, in 2013. The couple has one child together named Walker. Though Diggs said this past summer that he and Menzel still have a lot to figure out together, he made his first public appearance with his new girlfriend on June 29 at the BET awards.

More: Idina Menzel wants to star in Frozen on Broadway

Michele was dating her Glee costar Cory Monteith, who died last year from an overdose. The couple officially announced their relationship in February 2012 after months of speculation. Monteith died on July 13, 2013 and Michele was reportedly inconsolable. Since his death, the actress has publicly made multiple touching tributes to Monteith, including a song from her album called “If You Say So.”

www.youtube.com/embed/sleDuTyqUAs
The final season of Glee premieres Jan. 9 on Fox.