In the five-time Golden Globe-nominated film Imitation Game, British actor Benedict Cumberbatch plays a gay icon, but he does so much more than just play gay on screen. He speaks up for gay rights in that beautiful baritone we so love to hear.

The story of Alan Turing is not known by most, primarily because the heroic efforts he spearheaded in World War II were super-secret for decades before the truth was revealed. At Bletchley Park, Turing and his team of geniuses broke the German Enigma Code and possibly stopped the war two years early.

Despite this amazing achievement, Turing was later persecuted for being openly homosexual when this was still considered a crime. He had two choices: go to prison for two years, or be chemically castrated. In order to continue his work, Turing chose option two, which led to his eventual suicide.

Due to the the Weinstein Company’s superb media blitz, Cumberbatch, who plays Turing in the film (and is nominated for a Best Actor Golden Globe), has been everywhere from TV to radio to print. The media frenzy has given the actor countless opportunities to speak about gay rights and the tragedy that was the end of Turing’s life.

More: I’m obsessed with Benedict Cumberbatch, and here’s why

This isn’t the first time Cumberbatch has stood up for the gay community, though. Here’s a roundup of some of our favorite pictures, quotes and events in which Cumberbatch proves he’s a lot more than a pretty face.

1. He would defend gay rights “to the death” 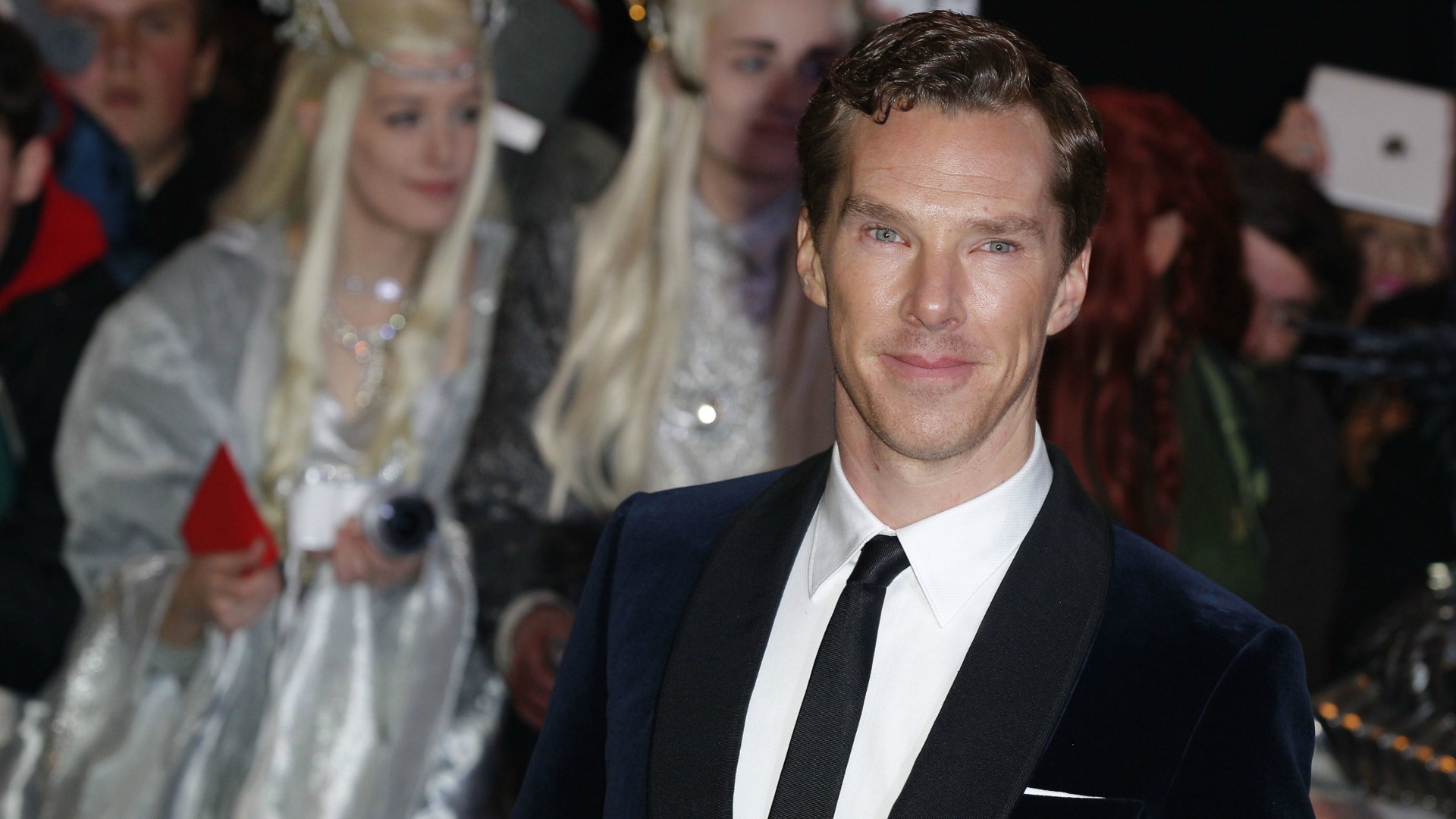 In a recent interview with The Guardian, Cumberbatch said: “People are being beheaded in countries right now because of their beliefs or sexual orientations. It’s terrifying. It’s medieval — a beheading! I’d take up arms against someone who was telling me I had to believe in what they believed or they would kill me. I would fight them. I would fight them to the death.”

2. That pardon by the Queen? Bollocks 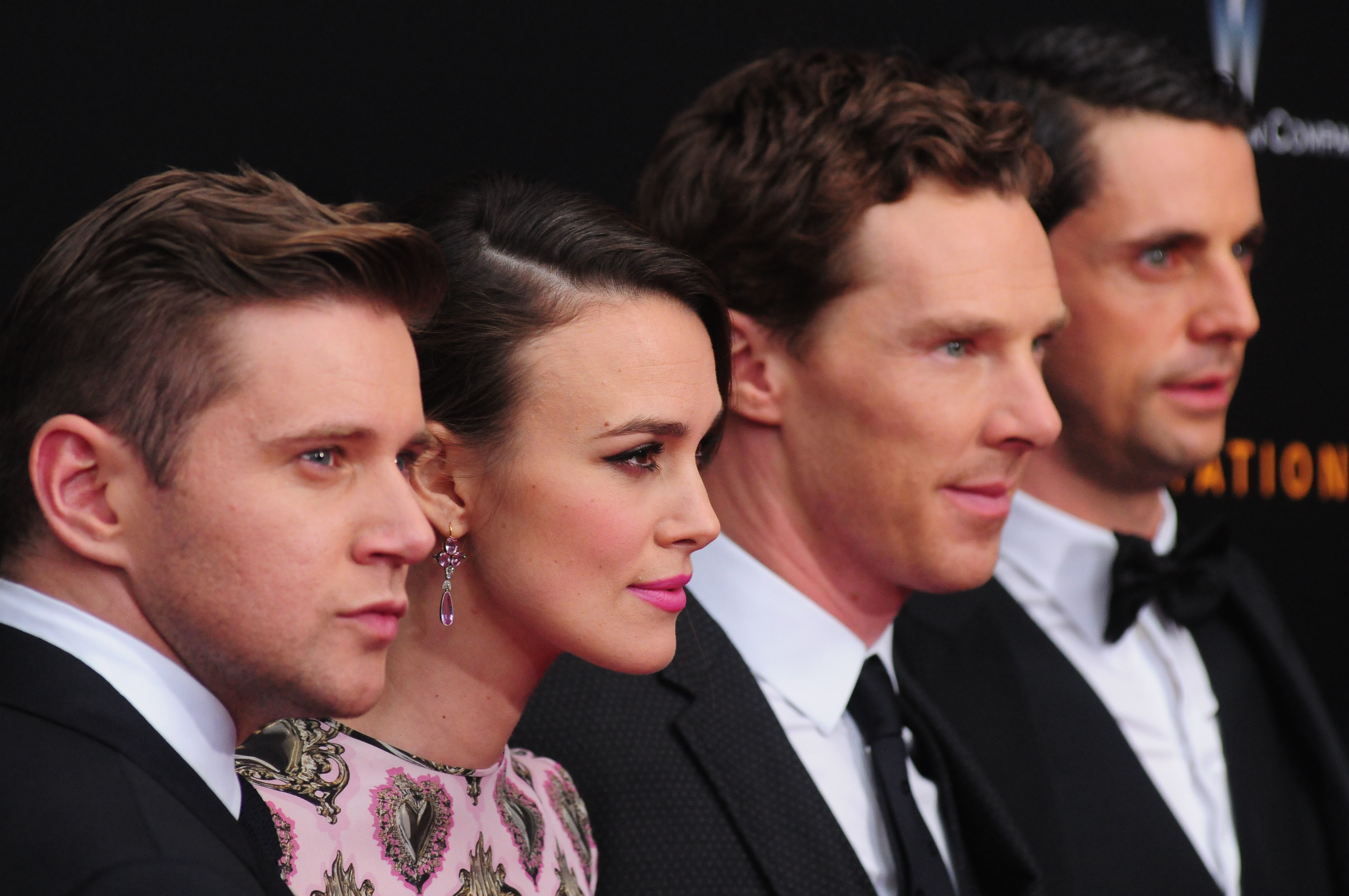 Alan Turing was pardoned by the Queen of England in 2013. Cumberbatch wasn’t impressed. “It’s an insult for anybody of authority or standing to sign off on him with their approval and say, ‘Oh, he’s forgiven.’ The only person who should be [doing the] forgiving is Turing, and he can’t because we killed him. And it makes me really angry. It makes me very angry.”

3. Although straight (and engaged to the lovely Sophie Hunter), he realizes being gay in Hollywood still carries a stigma 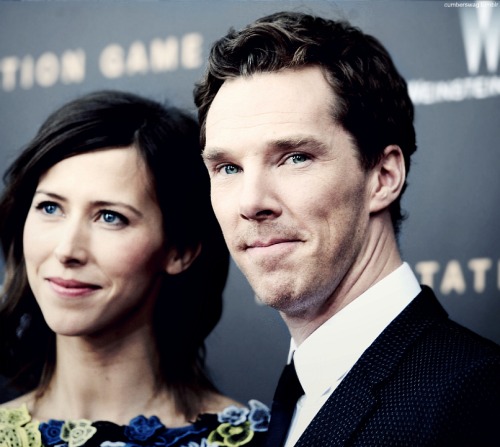 “We all know actors who are [gay] who don’t want to talk about it or bring it up, or who deny it,” Cumberbatch said in Out Magazine. “I don’t really know what they do to deal with it. Human rights movements and sexual and gay rights movements have made huge social progress in the last 40 years, without a doubt, but there’s a lot more work to be done.”

4. We interrupt all seriousness for a gratuitous snuggle with gay actor (and on-screen nemesis) Andrew Scott 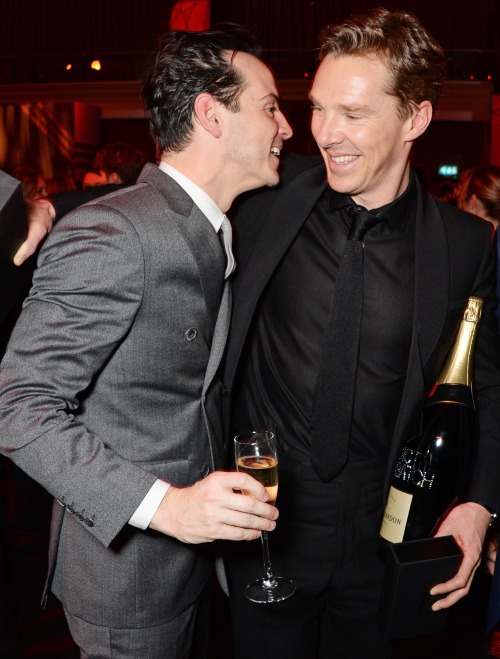 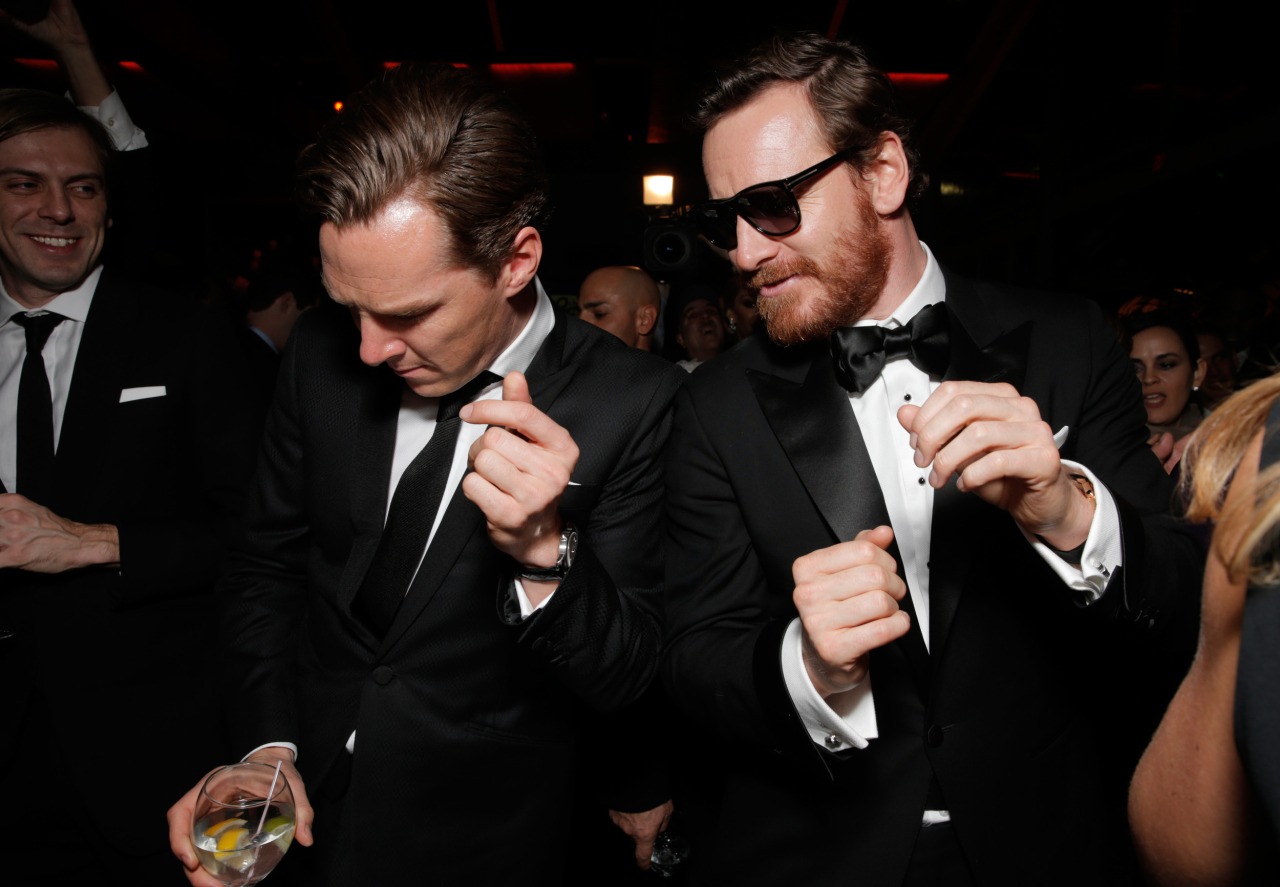 Cumberbatch told Out Magazine about his own boyhood experimentation at boarding school: “While there was experimentation [at Brambletye], it had never occurred to me as, ‘Oh, this is that.’ It was just boys and their penises, the same way with girls and vaginas and boobs. It wasn’t out of desire.” Gay rights groups have given him a cheer for being able to talk about stuff like this when so many other high-profile celebrities would never admit to such a thing. Cumberbatch even joked about it during an interview on The Graham Norton Show.

6. He officiated his gay friends’ wedding 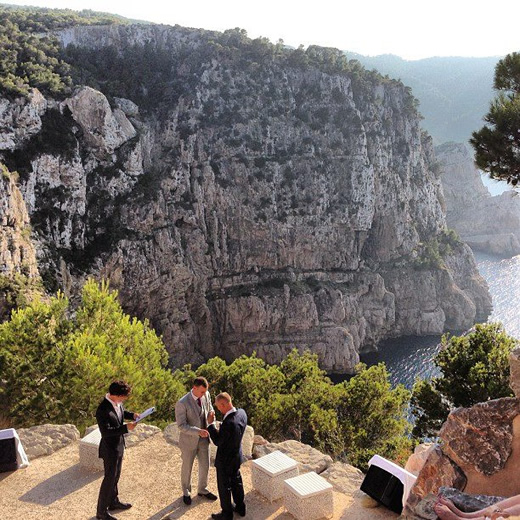 7. He takes on bullies who pick on gay kids (no, really)

While attending Harrow, there was a ruckus outside his house. Cumberbatch told Out Magazine, “These kids were chasing this poor kid, and they came into my house, breathless — a Sikh, a Jordanian prince, an Indian, and a Nigerian. I said, ‘Stop, stop, stop, stop,’ because they all just came charging down the corridor, and I said, ‘What just happened?’ and they told me, ‘It’s disgusting, isn’t it?’ And I went, ‘No, your behavior is f***ing disgusting. How would you feel if you were chased because you have a turban, or you were chased because of the color of your skin, or you were chased because of your religion? It’s about being an individual. You can’t tolerate that? Are you sick in the head?’ And they were like, ‘What? No. Why, are you gay?’ And I said, ‘No, but I can clearly see that you’re bullies. You’re just nasty human beings.'”

More: What would Sherlock be like in bed? Let Benedict Cumberbatch tell you 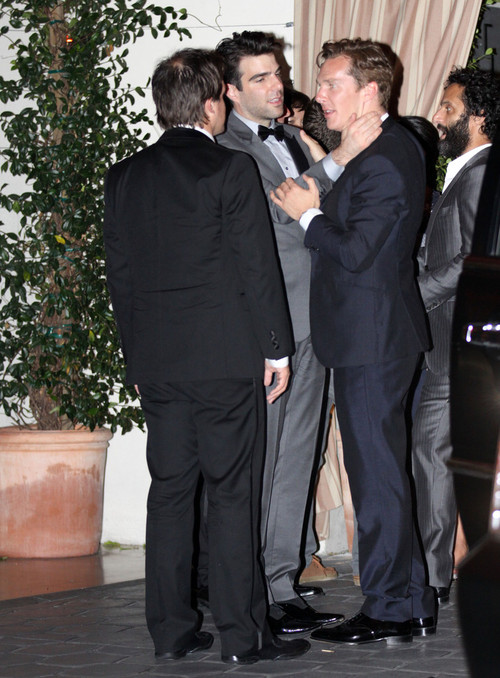 Alan Turing isn’t Cumberbatch’s first time playing a gay character. He was a closeted homosexual in Tinker, Tailor, Soldier, Spy, as well as in the stage play The Turning Point. Plus, he just recently hinted that his Sherlock on the BBC (the role that skyrocketed him to fame) could be gay. When compared to Doctor Who, Cumberbatch told podcast The Nerdist: “Sherlock talks fast and is clever, that’s literally the only bracket they share. They’ve got different dress senses, different tastes in the sex of their partners…” Possibly true. Let’s not forget the incredibly awkward scene in Season 1 of Sherlock when Watson tried to figure out his new roommate’s sexuality.

According to Sherlock executive producer Stephen Moffat, “We got the idea to do it from the palpable chemistry between Andrew and Benedict. We cut it right before the kiss. And the sex.” Cumberbatch promised it was no big deal. “It was like fist-bumping,” he said.

11. And why not one more picture… of Cumberbatch in drag? 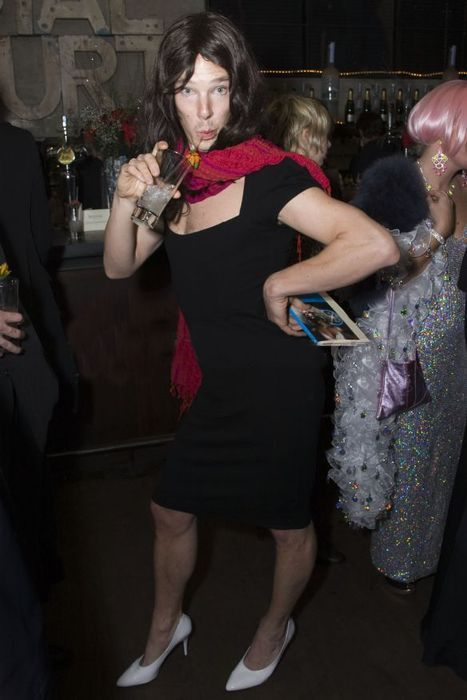