If you’re searching for your daily dose of inspiration, look no further.

Lupita Nyong’o delivered an amazing speech about dreams and her own journey to success to over 10,000 people at the the Massachusetts Conference for Women recently. At the conference, which hosted other keynote speakers, such as Hillary Clinton, Nyong’o wowed the audience with her touching story of overcoming huge obstacles on her way to becoming an Academy Award-winning actress.

Today, Nyong’o posted a picture of herself on Instagram, along with the link to her full speech about fearlessly following your dreams even when the odds seem stacked against you, which you can watch below. 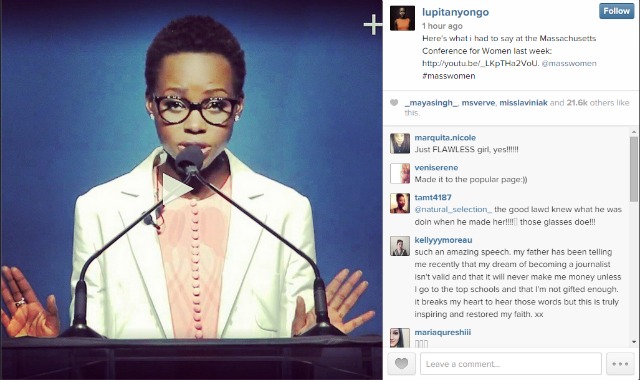 “Dreams, the dictionary defines them as a series of thoughts, images and sensations occurring in our brains when we are asleep or relaxing,” Nyong’o, who was also named People‘s “Most Beautiful” person in 2014, says. “The dreaming I would like to speak to is that glimpse of the thing you want to do that would make you feel most alive. A dream as a portal to your purpose. My dream was to be an actor from when I was young, but I didn’t always know it.”

More: Emma Watson supports the women of Turkey by laughing

Nyong’o, who hails from Nairobi, Kenya, became tearful while describing her journey. “What I wanted more than anything was to make believe for a living. When I watched The Color Purple and watched Oprah and Whoopi Goldberg, a seed was planted in my heart to become an actor, but I dared not water it in public,” she said as she became emotional. “I wept, just as I am now, because it was so hard to admit that I wanted to do something so improbable.

“Our dreams belong to us,” she continued. “We owe it to ourselves to try and realize them.”