His love, albeit unrequited, is pure, true and, well, relentless. It’s been years since Duff dated Carter and she has moved on. Instead of realizing that the Duff ship has probably sailed, Carter still seems to be pining for the actress and for some reason this year has been very vocal about his feelings on social media.

1. He loves her when she’s Lizzie McGuire 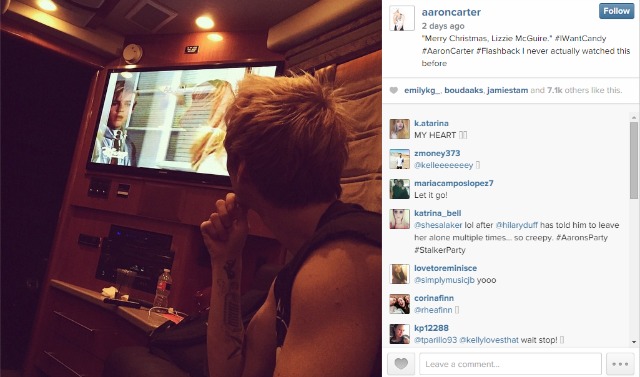 In case your memory doesn’t go back as far as 2001, Carter snuck a very Disney PG smooch in on Duff on her show back in the day.

2. He loves her when others don’t want him to

3. He loves her when he’s setting his DVR to catch that special kiss

4. And when he says it’s not serious

Yeah, Aaron… why did you say that?

5 & 6. He loves her in ways so deep and he doesn’t care what anyone else thinks

He really shouldn’t call a 13-year-old a stupid douche.

More: Hilary Duff is up for a Lizzie McGuire reunion? Please wait, while we faint

Besides his undying love, here are a couple other reasons she should take him back:

Holiday family gatherings with brother Nick Carter would be a blast.