Heads up, Madonna hackers: the Queen of Pop is angry. After two of the singer’s songs from her upcoming album leaked over the weekend, Madge took her anger out on an unlikely source: her iPod.

On Thursday afternoon, Dec. 4, the singer posted a photo of a broken iPod on her Instagram that is likely to make Best Buy’s Geek Squad cringe. I mean, it’s some serious smash that your phone insurance probably won’t cover. In the comments section, the new face of Versace described the gadget as a symbol of her “broken heart.” “That my music has been stolen and leaked! I have been violated as a human and an artist,” she continued, adding the hashtag “#f***edupshit.” 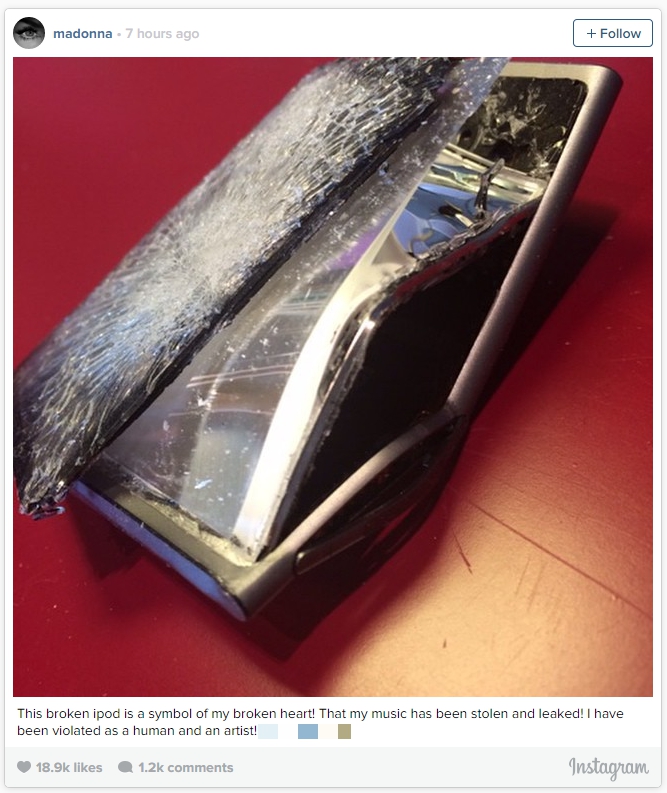 Madge has been locked up in the studio for quite some time, so it really felt like Thanksgiving when two of the singer’s songs (“Rebel Heart” and “Wash All Over Me”) surfaced on the internet last Friday. And despite some rumors that say the singer leaked the tracks herself, it’s clear that this is a serious issue for Team Madonna.

Later that day, the singer’s longtime manager Guy Oseary took to Twitter and asked fans to try to help nail down the perpetrator. Even though Madonna and company weren’t too happy with the leakage, it definitely is holding fans over for a little. While “Rebel Heart,” which was reportedly produced by Avicii, sees the singer talking about provocative times in her career and sounding better than most of the material on her unfortunate 12th studio album MDNA, “Wash All Over Me” is still definitely something we can live without.

Have you heard Madonna’s new songs? Share your reviews with us in the comments section below.