The recent article written by rapper Angel Haze got us thinking about homosexuality within the hip-hop community and the long road to acceptance still ahead. 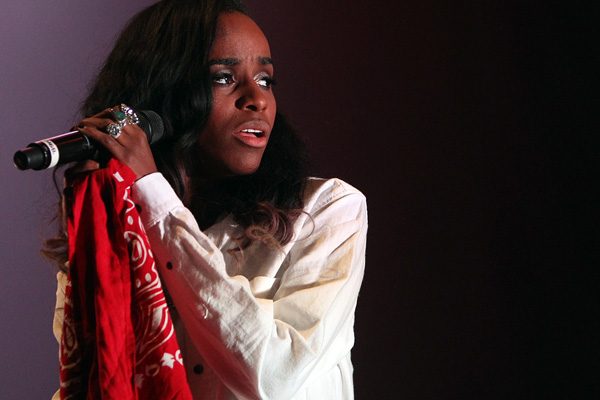 Clearly, there is room for improvement. Unfortunately, the hip-hop industry has been hitting quite a few walls lately — sexism, drug promotion, violence incitation and now, homophobia. We all remember the enormous thud made by the avalanche of jaws collectively dropping to the floor, when Frank Ocean came out of the closet a few years ago, and we regret to inform you that the cautiousness towards LGBT hip-hop artists remains very much intact to this day.

The up-and-coming rapper Angel Haze has recently penned a very poignant column for Noisey titled “Some Rappers Are Gay. Get Over It.”, discussing sexuality and the lingering prejudice against certain orientations in the hip-hop community, which suits this discussion perfectly. For the record, we hold this woman in the highest regard and her clarity at so young an age is refreshing. (She’s only 22 years old).

“I don’t have a coming out story because I don’t think anyone needs to come out. I don’t get the fascination with being gay, lesbian, bisexual. There’s no separation between gay rights and human rights,” Haze wrote.

With this, let us begin, shall we?

It may seem strange to separate the artist from their music — since it’s presumably a primal reflection of who they are as individuals — yet you have to remember that every musician creates a persona for the stage, which does not necessarily include all of their personal traits. Yes, artists write their music to express themselves, but it is also marketed for public consumption and hence cannot be absorbed as an unadulterated private revelation. The idea that hip-hop is tough and therefore only for quintessential straights is an illusion. Hip-hop is poetry, and poetry is universal.

“Being gay in hip-hop is still really stigmatized. There are so many people in this world that are closet homosexuals. I guess I’m “out,” but people ask me what my sexuality is all the time and I always tell them that it doesn’t matter, we’re not in a sexual situation so you don’t need to know. If we were in a sexual situation you would know exactly who I am sexually,” Haze continues.

“I don’t use gender pronouns in my music. For me it should be universal, something that everyone can relate to; if you like boys, if you like f****** puppies, who cares. I think that’s why I keep my personal life and feelings separate from my music or how I’m supposed to act cause I’m a pansexual rapper or a queer rapper or whatever.”

Believe it or not, spiteful words and actions do carry weight. Whether you’re crouched behind a computer screen, flailing your keyboard in an act of protest against homosexuality, or screaming out cliché slogans behind the sidelines — it matters. Not only are you placing yourself on a pedestal, thereby entitling yourself to pass judgment on others, but you are affecting the self-esteem of individuals deserving equal treatment. Live and let live, as they say. The hip-hop scene should be welcoming for all; it’s the only way it will continue to grow and change. New ideas and perspectives bring progress.

Again, Haze’s column comes in handy for a great example: “My friends have had boyfriends who abuse them and think that s**t’s okay. Yet they think that I’m an abomination. Strangers have attacked me, calling me a “f****** faggot,” a “homo rapper.” You have to listen to yourself, and go “This makes me feel right.” You’ve found someone you love, deal with it. Love is not a f****** crime.”

The exclamation mark is particularly significant in that subheading, because freedom is a right and should be demanded if someone carelessly attempts to stomp it out. In Angel Haze’s freestyle version of Macklemore’s “Same Love” she uses the line “I am whatever I am, when I am it.” We think it suits this topic perfectly. Sexuality is personal; we have to look beyond it. This should be promoted within the hip-hop industry where countless artists may be afraid to speak up for themselves. We should accept each other for being individual persons, not because of a particular sexual orientation. If a rapper is gay, it doesn’t mean that his or her lyrics will be drenched in homosexual innuendoes and will cease to relate to the human condition. Sexual preference is just a sliver of a person, not the whole cake.

We’ve been talking for quite some time. Now it’s your turn. What is your view on homosexuality in the hip-hop community and the stigma around it?

Miranda Kerr sings as pretty as she looks – Fact
Game of Thrones’ Ramsay Snow singing is just freaky
Gabriel García Márquez: 8 Quotes to remember him by