Seth Rogen admitted his adoration for Zac Efron’s sculpted body in the most hilarious way possible during his recent interview on Conan. We fully agree. 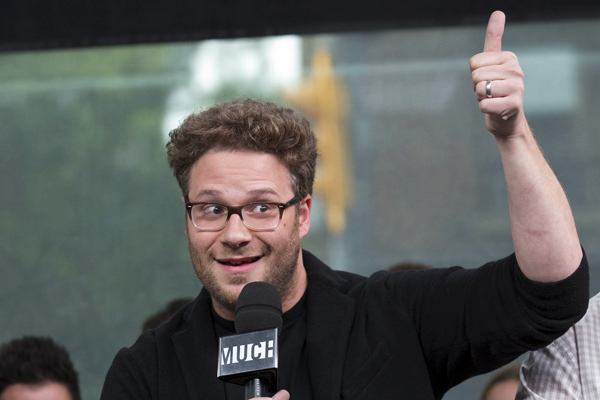 Seth Rogen has a strong appreciation for his co-star Zac Efron‘s muscular physique, and he is not even remotely shy about proclaiming it to the world. Can you blame him?

During his chat on Conan, the Neighbors actor praised Efron’s beautifully chiselled body, confessing that even he cannot help but want to touch it. And really, who are we to judge? We’d probably line up for that.

“We had to keep writing into the scenes that I would touch his body, because I would look at it and just want to reach out and touch it, as though it was a mirage of some sort,” Rogen joked. “He’s the sexiest mother****er alive.”

Only too true. We recognize a kindred spirit in Rogen, since Efron’s body is like a mythological creature… We want to believe it’s real, but it just seems so improbable. Watch Rogen go on about his hottie-tottie co-star below:

Wasn’t that hilarious? Since we support sexiness and all expressions of it, we would like to further this discussion by talking about Efron’s magnetic hotness through comparison.

Zac Efron, how do we love thee? Let us count the ways >>

He’s as tasty-looking as a strawberry dipped in chocolate

He’s as scorching as your dashboard in August

Feel free to contribute to our wonderful list of praise!

This hilarious One Direction video will have you in stitches!
Is The Colbert Report racist, or is Twitter overreacting?
Instagrams of the week: Britney’s hot bod and Fergie’s cake