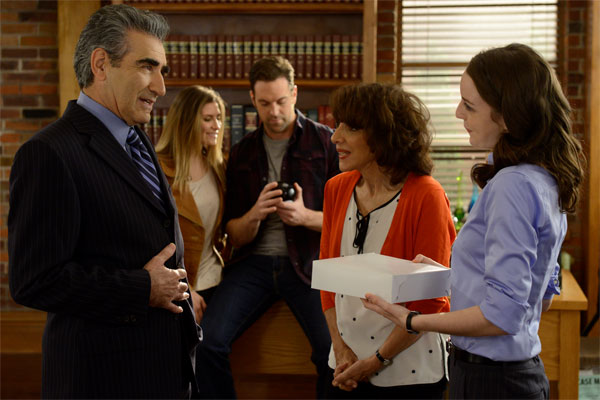 Andrea Martin is a comedy legend, and her new show Working the Engels is a clever dysfunctional family comedy that the National Post compares to Arrested Development. We think she’s reason enough to tune in, but in case you’re not convinced, here are a few more reasons.

Seriously, we can’t praise this woman enough. She’s dominated Broadway recently with an award-winning run in Pippin and chose Engels over several other projects she was offered. In the first two episodes, she has shone with incredible timing and delivery. This show seems like it was crafted especially for Martin. Now if only a show runner could do the same for Catherine O’Hara, we would be completely content.

Though the show is technically a Global production, NBC signed on as co-producer after Martin was cast, and has agreed to air 12 episodes. This kind of American-Canadian co-production is extremely unique and hopefully something we will see a lot more of in the future. Tapping into the American market means a much bigger audience and higher budgets.

It is sooo Canadian

It’s so refreshing to see Toronto being Toronto and not New York or D.C. The theme song is by the Bare Naked Ladies, and Jason Priestley directed a number of episodes. The only thing that would make this show more Canadian would be watching it while eating poutine, which we highly recommend. Get thee to Smoke’s, and order yourself a veggie deluxe.

In episode 5 of this season, the wonderful Eugene Levy guest stars alongside his daughter Sarah, who will be playing his daughter. Mega comedy legacy casting? Yes, please.

According to writer and script coordinator Stephanie Kaliner, this week’s episode involves ridiculous mother-daughter hip hop choreography created by Canadian dancer and choreographer Shawn Byfield. We’re sure Andrea will be able to pop and lock like a pro and crack us up while doing it. Is there anything this woman can’t do?

In the first season alone, Working the Engels has managed to snag some incredible guest stars. Expect a lot of SCTV reunions and meetings of Canadian comedy and acting heavyweights, such as Martin Short, Victor Garber, Eugene Levy and Scott Thompson. We’d love to see more of our favourite Canadians, like Nia Vardalos, Catherine O’Hara and Cobie Smulders, make appearances too.

The show airs every Wednesday at 9 p.m. ET on Global.

Seed season one recap
6 Expectations for the new Star Wars trilogy
The Giver trailer is here — what do you think?