We’ve heard news of David Fincher considering making another Steve Jobs biopic. We’re wondering if his idea of casting Christian Bale in the lead is a good one. 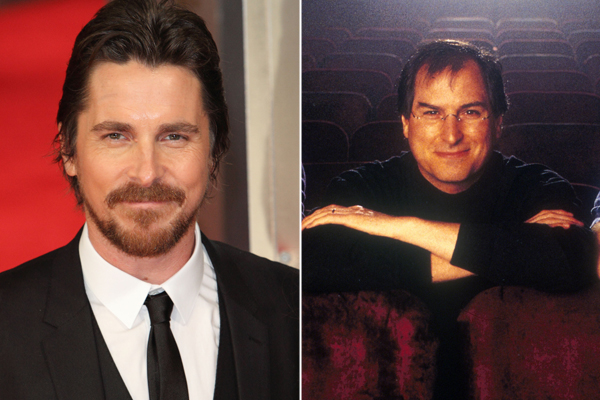 So nice, you can see it twice! Apparently, one Steve Jobs biopic just didn’t cut it (perhaps rightfully so). Hence, another one is in the making.

David Fincher — who directed The Social Network and The Girl with the Dragon Tattoo — is in negotiations to direct a brand new biopic based on the life of the Apple co-founder, penned by Andy Sorkin (Moneyball, A Few Good Men). Per rumours, Fincher has his eye fixed on Christian Bale for the lead, but the actor has not been approached about the role yet.

Here’s the rub, Fincher allegedly spilled to the Sony co-chairman Amy Pascal that he will only direct this untitled Steve Jobs project if Bale agrees to star. Now, all the pressure rests on those mighty Batman shoulders. . . Dun, dun, dun!

Of course, this film has more going for it than the Ashton Kutcher-starring biopic Jobs, since it would boast an award-winning cast and crew. It’s just a matter of getting the project off the ground with the right people. And while it seems redundant to be making another Jobs biopic, we support the idea of creating a film worthy of his legacy, and we think Fincher is the man to do it.

As for Bale for the lead, we’re kind of excited about that too. We haven’t even considered him as a possibility, but it all makes sense now and here’s why:

We think with the proper styling, Bale could easily pull off Steve Jobs. He has the facial structure for it: similar nose and lips. Throw in a little bit of makeup, and he is good to go. To be honest, we’ve never noticed the resemblance until now.

The wonderful thing about Christian Bale is his versatility, he can create an illusion of a fuller body with strategic clothes or even padding, but he is also naturally slender enough to play Jobs in his later years. We think Bale wouldn’t even have to lose weight for the role; he’s just that scrawny.

This may be the most definitive difference between Ashton Kutcher and Christian Bale: the latter is an exemplary actor. His performance in The Machinist was chilling, and his Oscar-winning role in The Fighter was an inspiration. Unfortunately, Kutcher does not have a comparably impressive resume. We think Bale could really dig into this role and make it his own.

Well, now it’s just a waiting game. The film could go ahead or be put on the shelf. What do you think of the project idea and Bale in the role of Steve Jobs?

The Giver trailer: Yay or nay?
6 Expectations for the new Star Wars trilogy
6 Legendary roles that famous actors turned down