Conan O’Brien is going to host the MTV Movie Awards this year, and we’re pretty excited about it. We’re even going to tell you why. You’re welcome. 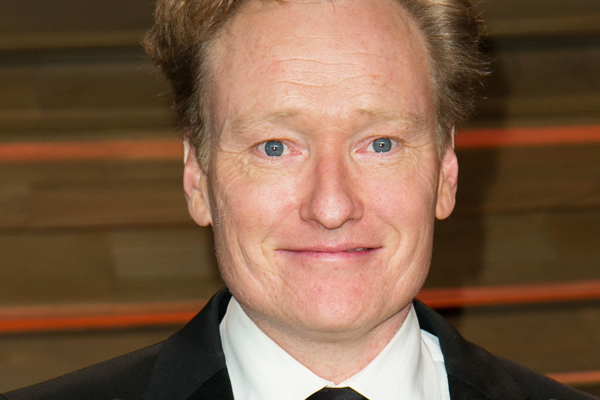 Best news of the day: Conan O’Brien has been selected to host this year’s MTV Movie Awards. High-fives all around, everybody!

Whether or not you’re a fan of the awards show, the TBS Conan host is plenty of reason to tune in this year. The ceremony will be honouring the crème de la crème of the movie world with adorable popcorn-shaped trophies at the Nokia Theatre in Los Angeles on April 13.

“After eight years of intense negotiations, I am honoured to announce I am hosting MTV’s second most prestigious awards show,” O’Brien jokingly said in a statement.

This is Conan’s first time hosting the MTV Movie Awards; previous hosts include Aziz Ansari, Mike Myers, Jimmy Fallon, Jason Sudeikis and Rebel Wilson. Obviously we think this is a fantastic idea… But for all you non-believers out there, we’ve created a special list of scientific reasons supporting O’Brien’s claim to the hosting throne this year. Prepare to have your minds changed!

2. All the movie jokes

We are so excited about this. You know at some point Conan is going to imitate Sandra Bullock from Gravity or poke fun at Bradley Cooper‘s perm in American Hustle… Maybe he’ll throw a horrible accent impression in there. We’re hoping to hear some Miley Cyrus jokes, because it’d be so easy. Don’t disappoint us, Coco!

Golden Globes and other most-tweeted events >>

Boom! We think we won at life just now. Since the MTV Movie Awards handed out their first popcorn statuette in 1992, there has been only one other redheaded host — Lindsay Lohan in 2004. We fervently support the gorgeous redhead community, and we support Conan.

What if Conan brings Andy with him? Or his pimp robot? This guy has connections everywhere, and you bet he’s going to pull out everything he’s got for his first time hosting the MTV Movie Awards.

Are you excited to see Conan host the MTV Movie Awards?

Veronica Mars recap: 10 Things you need to know before you see the movie
5 Political figures we’d like to guest star on Parks and Rec
The official Oscars drinking game