OK, any video of George Clooney is immediately a winner, but this one might just take the cake. The behind-the-scenes footage of Fantastic Mr. Fox was released online, and it is awesome!

Well, hey there! If you’re having a crummy day or just adore all things George Clooney, then this is going to make your day. Nay, it will may your life.

It turns out that somewhere on the dusty shelves of a cinematic library lay a roll of hidden footage featuring Mr. Clooney and the gang doing some unorthodox voice work for the 2009 animated feature Fantastic Mr. Fox. This newly revealed video will now be included as a bonus feature on the new Blu-ray release. Amazing, or amazing?

As you can tell, the cast and crew are not in the studio but are actually rolling around on a real farm. Director Wes Anderson employed this method to pull out a more natural performance from the cast, although not all members of the final cast were able to make it (they filled in the gaps later). But scruffy Clooney certainly did make it and looked mighty fine.

“We went to a farm in Connecticut, which was a really fun way to do it. I don’t think they usually bring the actors together into one place to record them for animated films…. We had most of the group. Some roles we hadn’t cast yet at that point, but we got as many as we could. We had George, and we had Bill Murray, and we had Wally Wolodarsky, who plays the sidekick character [Kylie], and a bunch of other people. It was really like summer camp,” Anderson told Vanity Fair. 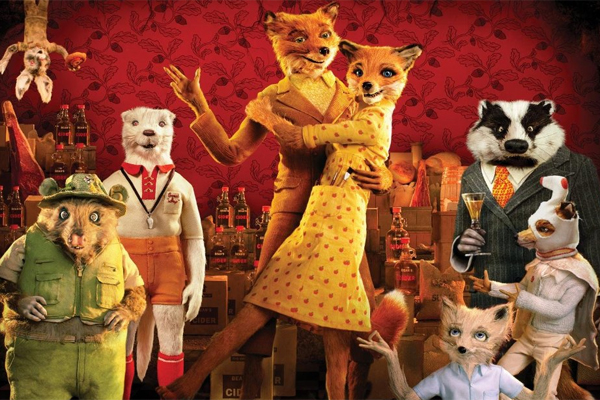 “They acted it out. We video’d some parts of it, but really, it was less formal than that. The actors played it as if they were being filmed, but the microphone could come in close. For scenes that were outside, we did them outside by a river or in the woods. We went to different places that corresponded with what’s in the scene.”

More: 4 Reasons you must try to win a date with George Clooney

We’re seriously freaking out about this! Can you imagine kicking it with George Clooney and Bill Murray on a farm? We wonder if they gathered around a fire and told ghost stories. Or pulled pranks on each other. Or put Bill Murray’s hand in warm water while he was asleep. So many possibilities!

We think more animated films should be recorded like this. It’s so fun! What do you think?