Ben Affleck and Matt Damon are joining their forces of awesomeness to raise money for their favourite charities, and are giving you an opportunity to meet them in Hollywood. 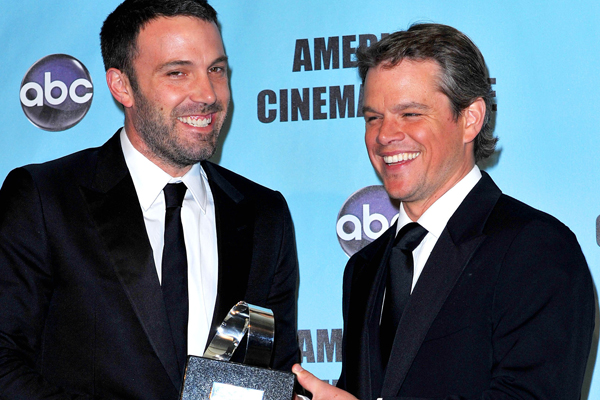 Aw, when these two unite, something magical happens!

Best buds (4eva) Ben Affleck and Matt Damon have joined forces to film an advertisement in the name of Lady Charity and raise money for the Eastern Congo Initiative and Water.org.

In the hilarious new ad, the two actors poke fun at each other and offer a very tempting incentive to get folks donating. Every donor is entered into a raffle to win a chance to fly out to Hollywood and have a hangskies session with Damon and Affleck at a VIP event. Don’t pretend like you’re not impressed. That’s pretty darn cool! All you have to do is donate $10 or more, and the proceeds go to charity. Win-win.

How we feel about the Ben Affleck and Matt Damon reunion >>

If you’re not convinced yet, maybe learning about these wonderful non-profit organizations will help sway you in the right direction. The Eastern Congo Initiative was established by Ben Affleck and Whitney Williams back in 2010. It aims to raise awareness about the issues within the Democratic Republic of Congo, and it provides funds to aid victims of rape and violence, vulnerable children (through education, health and reintegration of former child-soldiers) and to build human rights programs.

Water.org is another great non-profit organization, which aims to bring humanitarian aid to countries that have no access to clean drinking water and sanitation. Considering that every 21 seconds a child dies from a water-related illness (according to the charity’s website), this charity is a pretty big deal.

Hold up! Matt Damon paid how much for Nespresso ad? >>

So whether you just want to kick it with Matt Damon and Ben Affleck or help out a good cause, you can have it all for just $10. So tell your friends, and donate!