Canada is on fire right now! The Canuck team picked up four medals over the weekend, including our first gold. Our athletes are performing splendidly. 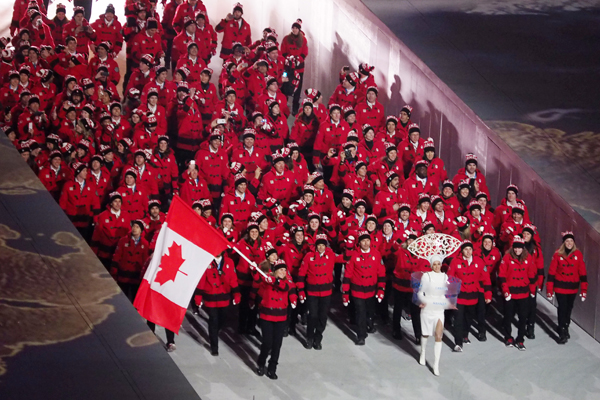 Before we go any further, we’d like to also announce that, as of Monday morning, the Canucks actually hold five medals. . . thanks to Charles Hamelin’s incredible performance in men’s 1,500 metre short track.

But anyway, the Canadian athletes worked very hard this weekend, placing us in the top three in the medal counting charts. Let’s see how we did, shall we?

OK, this was amazing. We actually have to say that twice: this was amazing. Sisters Justine and Chloé Dufour-Lapointe grabbed the first and second place on the podium during their freestyle skiing run. These two earned Canada two medals, including its’ first gold. We’re not going to lie; as they cried on the podium, we cried too. Shamelessly weeped, to be exact.

Kevin Reynolds did a spectacular job filling in for Patrick Chan; he was spot on. Canada’s sweethearts — Tessa Virtue and Scott Moir — also performed beautifully. Their collaborative effort earned Canada another silver medal. Watching these talented ice skaters was an emotional experience. (We love them so!)

Mark McMorris reeled in a gorgeous bronze medal for Canada in men’s snowboarding slopestyle finals. We have to admit, watching snowboarding is such a nerve-wrecking experience. . . We had no nails left by the end of it!

We’re so proud of our team! We are doing quite well in the rankings right now, so we’re pretty excited. This week is going to be intense, that’s for sure.