The opening ceremony finally took place and kicked off the 2014 Sochi Winter Olympics. Let’s review all the good parts and some of the not-so-good parts. 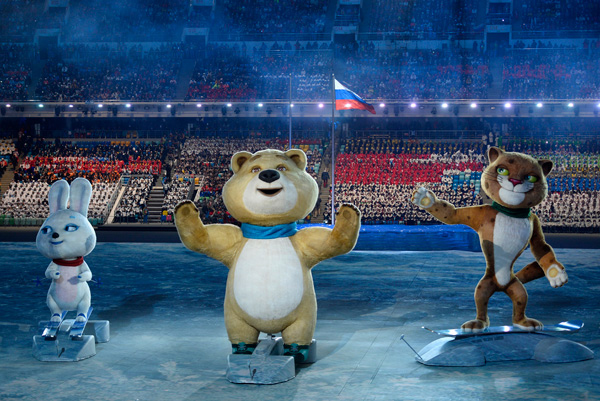 So the 2014 Sochi Winter Olympics officially kicked off with a bright and powerful opening ceremony that pretty much told the world that Russia is now the bee’s knees.

The proceedings went mostly according to plan, with a linear order of events. But instead of boring you with a summary of the ceremony, let’s just dive right in there and dissect it, shall we?

So the story was told through the eyes of a 9-year-old girl named Lyubov, who took us on a magical journey through Russian history. She floated around with a kite or a balloon, lending her angelic voice to several songs. It was all very innocent and adorable.

The ceremony took us from the country’s origins through its impressive literary history, through communism and up to the present day. It was a very clever concept and an amazing way to showcase Russian culture.

The visuals were stunning. Stunning! Did we mention stunning? Everything was very well designed and flowed like a dream. That said, we can definitely see why the Sochi Olympics are considered to be the most expensive ever — and also why they are so grossly over budget.

The visuals and the costumes were gorgeous, but the ceremony was incredibly over the top, almost unnecessarily so. The organizers were obviously very excited to display Russian heritage (last time the Olympics were in Russia was in 1980), but we’re sure they could have saved a few billion by omitting a few redundant details. Like the three giant robotic mascots of the Sochi Olympics… What happened to just forcing people to dress up in uncomfortable costumes?

The excitement of the teams was electric. We’d like to give a special shout-out to the Canadian team, because they are the best. And we’re obviously being completely objective about it. Team USA also looked great, like 200 models from a Ralph Lauren catalogue.

But the team that stood out the most is, by far, Germany. Its rainbow uniforms are glorious, whether or not they’re sending a political message about LGBT rights.

Dance of the jellyfish

This needed a special heading. This segment of the ceremony was meant to be a dance of the doves (if the translation serves us right), with a ballerina fluttering about, waking up the other birds. Except all the performers were wearing long, string-like lights, which made them look like jellyfish. So we’ve renamed the segment accordingly. It was still beautiful, though!

Now, on to the evil part — the issues. The biggest one by far was the Olympic rings malfunction. The gorgeous snowflakes were supposed to descend from the skies and bloom into the Olympic rings, but one of them was a little shy and remained a snowflake. Hence, we were left with only four rings. No biggie, though.

Another problem we had was with the speech made by the International Olympic Committee president, Thomas Bach… It was the longest speech we have ever heard, with too much repetition. We have so much respect for Mr. Bach, but come on!

It took ages to get to the lighting of the Olympic flame. Ages. Before the moment finally arrived, there was a redundant five-minute light show (which again explains why these Olympics are over budget). But then we saw her… Maria Sharapova emerging from the fog with the Olympic torch, like a holy spirit from the heavens.

The ceremony was beautiful and went relatively smooth. We think it might have gone a little overboard, and some segments were just unnecessary. But there is definitely no shortage of creativity in Russia, if this ceremony is any indication.

Russia wants you to know that it’s awesome, culturally loaded and full of possibilities. It arose from the ashes of communism like a beautiful phoenix ready to spread its wings and soar (human rights not included). At least that’s what we got from the ceremony.

What did you think of it?