It’s perfectly fitting that my sit-down with Jordan Hayes is featured in this month’s Alpha Woman issue, because the born and raised Montrealer is bold and definitely getting noticed in 2014. 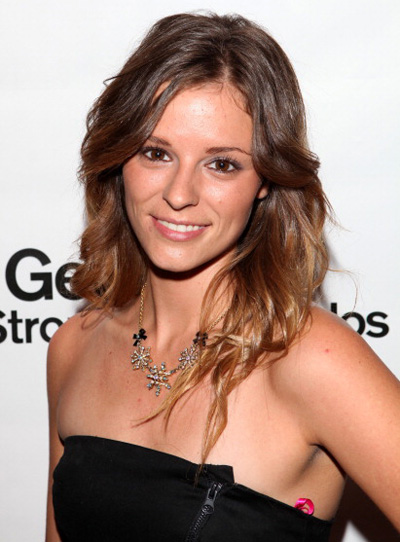 The Canadian beauty has guest starred on hits like Being Erica, Nikita, Flashpoint and many more. And now her breakout role as Dr. Sarah Jordan has her shining opposite Billy Campbell in Helix. The sci-fi series is about scientists from the Centers for Disease Control and Prevention, who travel to the Arctic to investigate the possibility of an epidemic.

Helix is helmed by Ronald D. Moore (Battlestar Galactica) and Steven Maeda (Lost, CSI: Miami, The X-Files), among others. The first 15 minutes of the pilot were released earlier this week in the lead-up to its two-episode premiere on Friday, Jan. 10 at 10 p.m. EST on Showcase. And the ever-humble Ms. Hayes let SheKnows pick her brain about it all.

SK: Did you think you had gotten the role when you first auditioned?

JH: I had just moved from Montreal to LA about two months before I auditioned for Helix. When I got the breakdown, I had a conversation with my friend. I told him, “I’m not sure I should even audition. It means moving back to Montreal for five months, and I just moved here!” To which he quickly replied, “Slow down. You don’t have the part. You haven’t even auditioned.” (laughs) I just had a feeling that I was going to get this one. It’s a rare feeling. And moving back to Montreal turned out to be one of the best things in my life. I love this city.

SK: What a coincidence that your character’s last name is the same as your first name! If you could change your name to anything, what would it be?

JH: It’s funny. People would get confused on-set and never know what to call me. I think some of the crew may think my real name is Sarah. Growing up, I was self-conscious about my name, because people would always think I was a guy. But I’ve grown to love my name. I would never change it.

SK: There are some complicated-sounding diseases out there. Was it tough learning the “doc talk” lingo?

JH: Personally, I loved the challenge of the dialogue in this series. Memorizing the lines wasn’t that difficult for me. The difficult part was understanding exactly what I was saying. It was important for me to have a very clear understanding of the science I was referring to. Luckily I have a brother who majored in anatomy and cell biology. There were several nights where I would be up late with him, going through his old text books. Thankfully he was very patient with me!

JH: My first year in college, I was in a pre-med type program. In a way I was on a path to doing something in the scientific world. However, after my first year, I transferred to the theatre program. I’m not sure if I would have made a good doctor, but I always had an appreciation for science and math in school.

SK: In an interview, you described Sarah as an overachiever. Is the same true for you?

JH: I think we’re very similar in that regard. I’ve always been ambitious. To give you an example, I grew up playing soccer. It was my life. When I was 10 years old, I was asked to play on a boy’s team. The league said girls could not play on boys’ teams. My mom took them to court, won, and I was the only girl playing in a AAA boys league from the ages of 13 to 16. Sarah wants to prove her worth — that’s definitely something I can relate to.

SK: What was the best part of working on this series for you?

SK: What are you working on now?

JH: I just directed my second short film, Ten Speed. At the moment I’m knee deep in the editing process. It’s a short film that I wrote myself, and I’m very proud of it. I’m lucky enough to have the most amazing friends ever, who help me whenever I say, “Hey, guys! Let’s make a short film!”