The always-hilarious Steve Martin has taken to Twitter to dispel the non-existing rumours concerning his non-existent relationship with Khloé Kardashian. No, they are not dating! 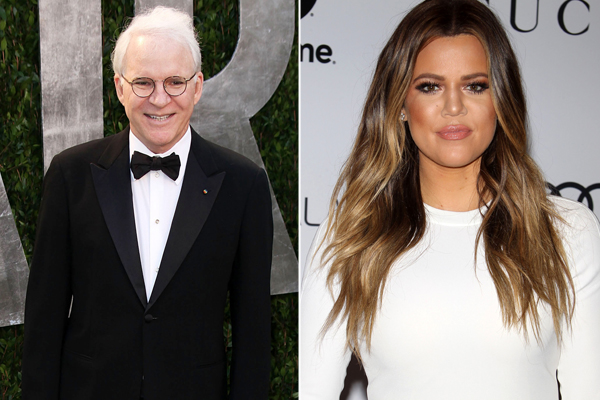 It takes a comedian to defuse a situation. Steve Martin has simultaneously built up and shot down his own rumour regarding his relationship status with the newly single Khloé Kardashian. We can’t pretend we didn’t notice the stolen glances and those longing looks.

Now, to eliminate any confusion. . . There was never a rumour about the two ever dating or even meeting, but Martin took the liberty to set the record straight anyway. Such a gentleman!

Despite rumors, Khloé Kardashian and I are “just friends.”

It turns out there’s even musical evidence of their friendship:

Be sure to check out my new album, “Just Friends with Khloé Kardashian.”

Printer-buying evidence that there is nothing but platonic love between the two:

Khloé just called asking what printer to buy. Further proof that we are “just friends.”

Did we mention they’re just friends? The comedian is clearly poking fun at an actual rumour that purported that Kardashian is dating Los Angeles Dodgers outfielder Matt Kemp. Just to put things in perspective, Khloé filed for divorce from Lamar Odom only on Friday. . . but the tabloids are already pairing her up!

4 Winter-set comedies that will cheer you up >>

Also, Martin himself has been happily married to Anne Stringfield since 2007, so he is definitely not hitting on Kardashian. Although it does seem like it! We’re glad the actor took this situation and put a funny spin on it. We hope Khloé had a kick out of it too. Can you imagine if Khloé and Steve did end up dating?

Do you think Martin made a funny, timely joke or was it insensitive?

Photo courtesy of FayesVision and WENN.com