Lady Gaga released a new short film to accompany her new record, ARTPOP, and it’s a little redundant, we think: loads of nakedness and symbolism we can’t relate to. 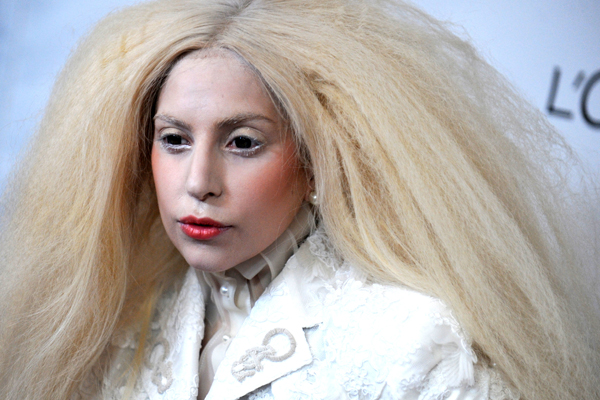 We don’t even know what to do with this, really…

Apparently records are no longer a sufficient method of self-expression, at least not for Lady Gaga. A week after releasing her third album, ARTPOP, the 27-year-old singer unveiled An ARTPOP Film at an ultra-exclusive, secret artRAVE party in Brooklyn. The two-minute video was finally released for public consumption on Wednesday.

Gaga collaborated with Inez and Vinoodh for the project, which features a lot of flashing lights, microchip things (is that because her album is inspired by electronic music?) and the singer being naked — again and again.

Lady Gaga: ARTPOP is the best album ever >>

“This album is a celebration, my pain exploding in electronic music. It’s heavy, but after I listen to it, I feel happy again. I feel lighter,” Gaga said in a croaky voice during the intro of the film.

Oh, look! There’s Gaga half naked in a toilet paper wedding dress. There she’s naked and covered in moss. Naked wearing a yellow parachute. Naked in a black blanket. Half naked in some white lingerie. Just naked again with toilet tissue in her mane. Naked inside what appears to be a giant iPod. Naked holding a vase. Naked holding wigs… Basically, she’s naked a lot in this short film.

And if she’s not naked, she’s either crying or sporting a grill made of — what we can only guess are — genuine Neanderthal teeth, which is just plain creepy!

We love Lady Gaga, but by releasing a short film with the surface value of a bag of Skittles and theatrics of an insurance commercial, she’s alienating her fans instead of expanding her army of Little Monsters. Especially since the film was first shown at a party none of her fans were invited to or probably even heard about.

If Gaga had unveiled the project at a later time, without relating it to her record, then she could have swung it as an artistic venture independent of her music career, but she didn’t. While ARTPOP peaked at No. 1 on the charts, it’s still significantly behind Miley Cyrus’ Bangerz and Katy Perry’s Prism. Gaga could use some positive publicity to boost her album sales, which this film did not garner.

We think Gaga needs to put her clothes back on and focus on interacting with her fans instead of attempting to get her name in the headlines. The woman has talent — she should use it!

Watch the short film below, and let us know what you think!

Oh my! Backstreet Boys are keeping fit!
Are Justin Bieber’s antics affecting his career?
Kendrick Lamar is the king of hip hop: See our runners-up