They still got it! Backstreet Boys has released a brand new video for its single “Show ‘Em (What You’re Made Of),” and it is all kinds of sultry. See for yourself! 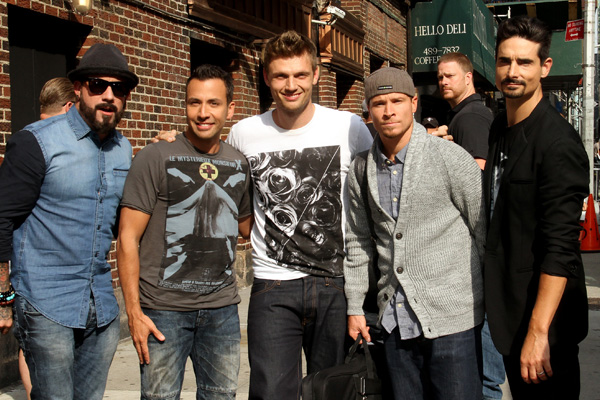 Is it heating up in here, or is it just us?

The Backstreet Boys were right on the money back in 1995 when they sang “We’ve Got It Goin’ On,” and not much has changed. The fellas are still looking mighty fine to us.

The band released its new music video for “Show ‘Em (What You’re Made Of)” on Tuesday via Facebook, and it is just a feast for the eyes and the ears — but mostly for the eyes! Never to be confused with boys again, the Backstreet Men will serenade you with their new song while wearing tight black tees, muscle tanks or no shirts at all.

“This song is very personal and special to us. We hope you love it as much as we do,” read the caption for the music video on Facebook.

No doubt all the ladies will indeed love this song. The premise of the music video is quite simple: The fellas (in various degrees of shirtless-ness) passionately sing sweet emotions to you in front of a black background. It’s quite intimate, which is fine, since Brian has no shirt on — it’d be awkward otherwise.

“Show ‘Em (What You’re Made Of)” is the third single off the Backstreet Boys’ latest album, In a World Like This, which came out back in July.

Backstreet Boys get a Hollywood star! >>

We think we speak for all womankind when we say thank you, Backstreet Boys, for existing and rocking those bods even in your late 30s. You inspire us to force our significant others to go to the gym. Now, without further ado, check out the video, and tell us what you think!