Jennifer Lawrence exudes confidence at all times, so we’re not surprised that she can intimidate men, but we definitely did not see this one coming! 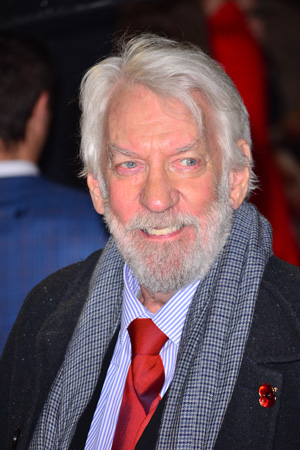 You wouldn’t believe it, but sometimes Jennifer Lawrence‘s charisma and raw magnetism can turn a man into an incoherent nervous wreck — even if he is an acting veteran!

Donald Sutherland, who plays President Snow in Hunger Games, revealed that not only does he have a lot of respect for Lawrence but that she can also turn him into a babbling pile of goo.

“She channels epiphanies. She’s brilliant, she’s brilliant. She’s unlike other performers,” the actor stated during promotion of Catching Fire. “When I work with her, between Katniss Everdeen and Coriolanus Snow, it’s a battle I can taste, eat — I love it!”

The actor added, “When I see her, I babble. When I meet her coming out of an elevator, I’m blub, blub, blub.“

How amazing is that? We have a lot of respect for Lawrence. We think she’s a top-notch actress and has an incredibly unique personality, but how do you make Donald Sutherland babble? We can’t even picture it!

The actor has been in the film industry for nearly 50 years and has co-starred with many talented women, but this is the first time he’s praised an actress so highly! And here we thought we couldn’t possibly love Lawrence any more…

We think this is adorable and just demonstrates Lawrence’s powerful presence — everyone loves her! What do you think?

Angelina Jolie gets humanitarian award for being amazing
Instead of Marilyn’s X-rays: 4 Better ways to spend $25,000
Miley Cyrus proclaims herself a feminist!