Oh, you magical wizard, you! Angelina Jolie received the Jean Hersholt humanitarian award at the Governors Awards over the weekend, recognizing her philanthropic efforts. 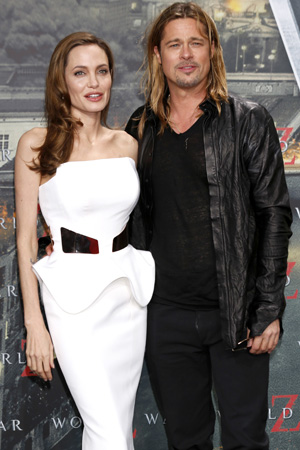 Angelina Jolie remains a wonderful, generous human being and even received a prestigious award for it this weekend!

The 38-year-old Oscar-winning actress received the Jean Hersholt Humanitarian Award at the Governors Awards on Saturday, in recognition of her endless philanthropic work. We think it’s mighty well deserved.

The Humanitarian Award is bestowed upon an individual in the film business whose charitable actions merit the industry. Previous recipients of include Oprah Winfrey, Quincy Jones, Audrey Hepburn, Frank Sinatra and Bob Hope (just to name a few). It’s safe to say Jolie is in good company!

The actress attended the ceremony with Brad Pitt and their son, Maddox. In her typical graceful manner, Jolie thanked her beau during the acceptance speech, stating: “My love. Your support and your guidance make everything I do possible.”

And, whilst being a little misty-eyed, she told the audience, “I’m not going to cry, I promise.”

Even she even specifically addressed Maddox with, “I’m not going to embarrass you. You and your brothers and sisters are my happiness and there is no greater honor in this world than being your mom.”

Even a person made of pure stone could not withstand the sweetness of this woman! As to Jolie’s deservedness of this incredible award, it’s not even up for debate: The actress spent years as a Goodwill Ambassador for the United Nations High Commissioner for Refugees travelling the world over to raise awareness for humanitarian crises, and she is now a Special Envoy for the UN, still relentlessly fighting to give refugees in war-torn countries a voice. She’s truly a commendable philanthropist.

Angelina Jolie admits to having a double mastectomy >>

“I will do as my mother asked and I will do the best I can with this life to be of use,” Jolie stated. “And to stand here today means I did as she asked and if she were alive she’d be very proud, so thank you.”

Oh, come on! Even we’re getting a little teary-eyed. how does she do it? The Governors Awards was not completely given to Jolie, of course. Academy Honorary Awards were given to Angela Lansbury, Steve Martin, and costume designer Piero Tosi.

Congratulations to all recipients, especially Jolie! We hope the actress will continue making the world a better place with her humanitarian work!

What do Zac Efron and Kanye West have in common?
Instead of Marilyn’s X-rays: 4 Better ways to spend $25,000
Miley Cyrus proclaims herself a feminist!