Jessica Simpson has a tough time in the tabloids, mostly because they seem to enjoy bashing her baby weight gain. Why can’t we just appreciate Simpson and leave her weight alone? 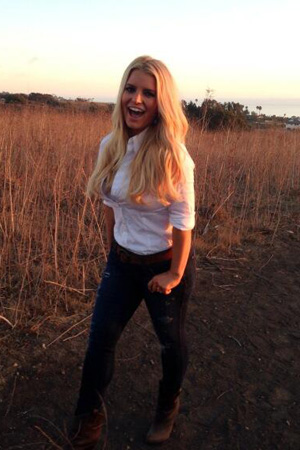 When it comes to weight bashing, nobody has soldiered through it quite like Jessica Simpson. The mother of two has become a regular on tabloid covers and article headlines aiming to humiliate the numbers on her scale. But she remains as strong as ever!

The 33-year-old star showed off her wonderful figure while on the set of a Weight Watchers photo-shoot via Twitter on Friday. And boy, she looks amazing!

Simpson is back as a spokesperson for the weight-loss programme after giving birth to son Ace in June. The fashion empress and her fiancé, Eric Johnson, are also the proud parents to one-year-old daughter, Maxwell.

Jessica has not had an easy journey through both pregnancies, but for all the wrong reasons. The star has become a punch line of numerous jokes due to her weight gain during the pregnancies and inability to drop the pounds two minutes after labour. Simpson has been called “fat” on practically every tabloid cover, and there are several websites devoted to relentlessly bashing her weight.

But, why? What is it about Jessica that makes her such a rewarding target for torment? Sure, she’s no Miranda Kerr, who dropped her three ounces of baby weight during the 30-second walk from the hospital to the car. But Simpson is also no different from the millions of American women who gain weight during pregnancy and also struggle to shed it! Are we punishing her because she didn’t hire an Olympic trainer to help her slim down? Or is she the scapegoat for other women’s insecurities? Because let’s be honest, it is not men behind those mean comments — it’s fellow women.

Instead of ripping Simpson apart for being human and having better things to worry about, why not praise her for being strong? How well would any of us fare under the scrutiny of the tabloids, with our photos plastered on magazine covers? Jessica is not obsessed with dieting and loses weight at a slower, healthier pace. Instead of bashing her, why not appreciate the fact that she is a rarity? She is not ashamed of her weight and is a viable role model for other women, who are dealing with similar problems. She gave birth to two children in a span of two years, why should she feel bad for gaining weight or even worse, why should any have a right to publically shame her for it?

While we continuously complain about the impossible beauty standards of today’s society, we perpetuate the same ideology behind our keyboards or simply apply it to other women. Can’t we finally come to terms with the fact that all women are different and just accept it? We should support each other and keep those fightin’ words to yourself.

Stylish men of 2013: From David Beckham to Ryan Gosling
Winona, you’re not alone! Other celebrities who were bullied
We spy a trend! Jennifer Lawrence joins pixie cut army!