Hmm. . . Jada Pinkett Smith has given in to the emerging trend of shaving off one’s sides. The star debuted her new hairdo at an event in Beverly Hills. 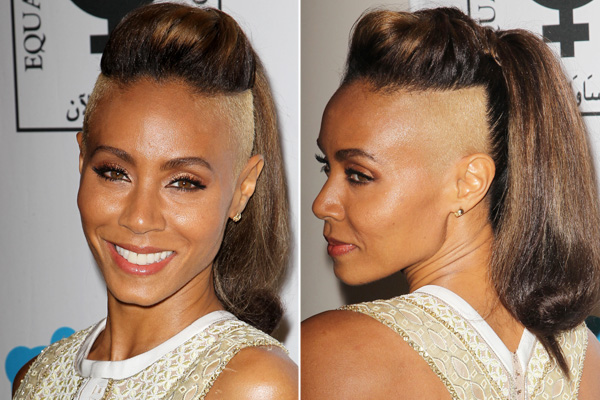 To be perfectly honest, we’re not sure where this trend comes from. Did women suddenly realize that electric razors can be used on heads, too, and get a little too excited?

Case in point: Jada Pinkett Smith was spotted leaving an airport last month sporting a more risqué hairstyle with shaved-off blonde sides. The star’s new ‘do made its official debut on Monday evening, when Pinkett Smith attended the “Make Equality Reality” event at the Montage Hotel in Beverly Hills.

Jada Pinkett Smith on rumours: “Will and I know the truth” >>

So, what we have here is a Mohawk-like contraption, composed of a French braid that flows into a high ponytail and some shaved bleached sides. But, why?

Maybe we’re incredibly out of touch with trending hairstyles, but isn’t this hairdo awfully inflexible? Sure, you can pull it into a high ponytail and it will look sleek and it will make you feel like the female equivalent of Billy Idol. But what else can you do with it?

Jada and Will Smith are not in an open marriage >>

We paint quite the picture, don’t we? To be frank, this hairstyle probably works only for celebrities (like Jada, Miley Cyrus and Rihanna) because they can have hairstylists literally camp out at the foot of their bed. For an average woman, the sheer upkeep of the ‘do would drive you mad.

So, to sum up. . . we like the hairdo on Jada, but we just don’t understand why she would get such a high-maintenance coiffure. We’d like to see how she will grow it out. What do you think of it?

J.Lo did not have plastic surgery, but these stars sure did!
Top Twitter users: Katy Perry conquers all!
Justin Bieber spotted leaving brothel in Brazil