Surprise! Justin Bieber was photographed leaving a famous brothel in Rio de Janeiro on Friday, and he was not alone! Two women accompanied the singer back to his hotel. 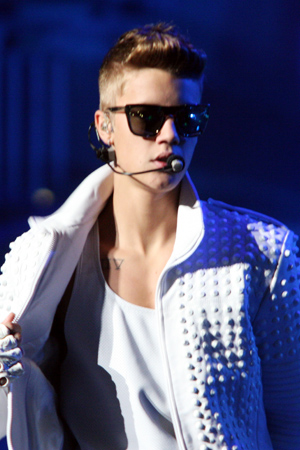 The rumour mill really never lets up on Justin Bieber, does it?

According to Page Six, the 19-year-old singer was caught sneaking out of the Centauros brothel, with two women in tow, while in Rio de Janeiro, Brazil, on Friday. Didn’t see that coming, did you?

Bieber allegedly spent three hours in the establishment with a friend, before exiting — wrapped in a bed sheet! — with his security escort and two female companions. The singer popped into the backseat of one car, and the women were placed in a separate SUV, all the while shielding their faces from photographers. Both cars drove back to Bieber’s hotel.

Despite his security team spraying the paparazzi with water as a deterrent, the pop star was identified by his wraparound wrist tattoo and signature running shoes. His presence at the brothel was reportedly confirmed by his own security team.

So, how did the paparazzi know where to look? (Rio is a huge city, after all!) Well, according to Page Six, photographers were tipped off about his visitation to the brothel and then lay in wait for his departure. Worked out well for everybody. . . except for Justin, of course.

Unfortunately, this is not the first time Bieber is accused of seeking the services of a lady of the evening. According to the Panama newspaper, Cronicas, the star allegedly spent a night with a prostitute in Panama City just last week. Bieber reportedly met the call girl in a nightclub, took her back to his hotel room and paid $500 for her sexual favours. As you can guess, that did not sit too well with his predominantly female fan base!

We’re not sure if Bieber is trying to shed some kind of image or perhaps build up another, or if he just doesn’t know what to do with his Mount Everest of money. But we have a feeling there are better ways of handling life than this. Come on, now! What do you think?