You’d think he wouldn’t be, but he is! George Clooney restated his singledom in a recent interview with People magazine, after being linked to three women. 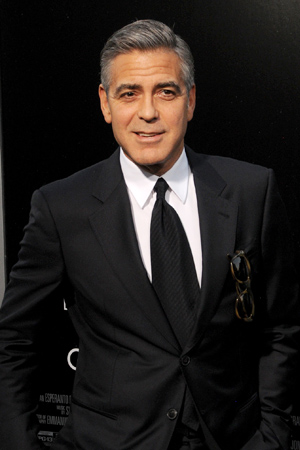 OK ladies, we need to clear the air here. Yes, George Clooney is criminally good-looking. Yes, he is so handsome it makes us want to weep into the shoulder of our Boyfriend Pillow, but that does not mean he is incapable of remaining single as a Pringle!

While the image of a peaceful meadow lined with beautiful women and Clooney prancing through that meadow belting out “I Put a Spell on You” seems almost natural since the actor broke up with Stacy Keibler, it’s hardly accurate. Clooney has actually taken a rare measure and addressed the multitude of recent rumours, linking him to three different women in a span of just three weeks.

Despite being notoriously private, the 52-year-old actor wanted to let the world know that he is not dating Katie Holmes, Amal Alamuddin or Monika Jakisic. All three unsuspecting women have been relentlessly harassed by the press in the past few weeks, after being spotted with Clooney.

“Three different stories in three weeks. I should be an athlete,” the actor told People magazine. “But, no of course, it’s all made up.”

Clooney broke up with Keibler in July and it seemed rather impossible for the actor to stay single for longer than a shower. Shortly after the split, he was linked to his ex-girlfriend model, Monika Jakisic. When that didn’t stick, Clooney was then romantically affiliated with Katie Holmes. And finally, after an innocent dinner, the actor was linked to Amal Alamuddin.

“George wants this Monika crap to stop,” Clooney’s rep told the magazine. “He wants Katie to get a break, and he wants Amal to be able to prosecute cases without being hassled because she had one dinner with George and four others.”

Adding, “I even asked George if these [rumors] were true and he said he never comments on his private life, but in the interest of stopping the harassment of all three of these women, he felt he should.”

Despite a few misgivings, we think it’s safe to assume that George Clooney is a human and as such, is allowed to socialize with fellow members of his species. We can’t assume every woman he converses with or grabs a cup of coffee with is his fiancée. . . Well, we could, but that’s just crazy! So, let’s cut the guy some slack!

Chris Brown enters rehab; did Mike Tyson’s advice help?
Prince Harry broke his toe; will he drop out of South Pole race?
3 Celebrities who could lead a revolution