This is why we love Paul McCartney! The ex-Beatle released his music video for “Queenie Eye,” off his new record, and it features a village of celebrities rocking out to the single. 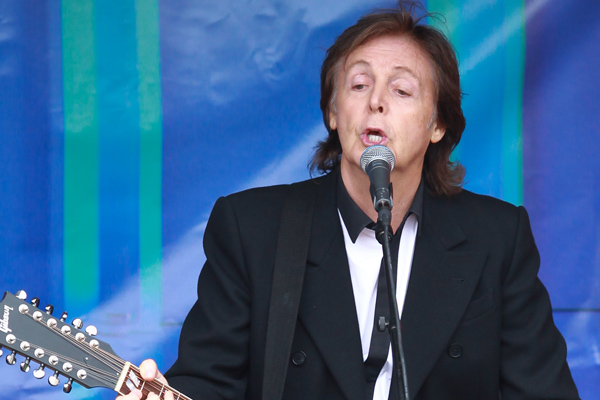 Only Paul McCartney can send out an invitation to the most talented people of his and our generations to make an incredibly upbeat, infectious music video, which is exactly what he did. What a brilliant man!

The former Beatle released the video for “Queenie Eye,” off his album New today, filmed in London’s iconic Abbey Road Studios, and it features the crème de la crème of celebrityhood. We’re not kidding; just spit out a name!

The concept of the video is pretty simple: McCartney sits at the piano and plays his catchy song, and the stars appear like apparitions and rock out to the tune with big smiles on their faces. Sounds un-inventive and mundane, but the energy in the music video is infectious! It’s almost mesmerizing to watch.

Of course, everybody noticed that Johnny Depp and Kate Moss appeared in the video together, although they never interacted onscreen. The two dated for four years back in the ’90s, and so their appearance in McCartney’s video is receiving quite a bit of attention.

What makes this video extra special — besides the Depp-Moss reunion, all the stars and McCartney — is that Abbey Road Studios was where The Beatles recorded the majority of their music. The band even named its 1969 record Abbey Road, after the street the studio is on.

So needless to say, McCartney did a splendid job with this one! He may be one of the few people in the world who has enough magnitude to casually toss so many celebrities together in a four-minute music video.

The Smiths’ The Queen Is Dead named greatest album of all time!
Drake cancels concert in Philly; fans already in their seats!
Taylor Swift promises a different sound on fifth album