What would you do for your job? With the recent circulation of Jake Gyllenhaal’s newly-debuted weight loss for a movie role, we’re taking a look at other actors who have shed the pounds for a film. 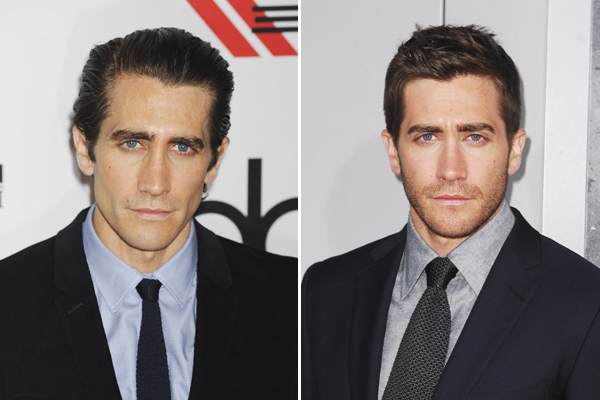 It’s no secret that actors and actresses go through a lot to create a character for a movie, but these new photos of Jake Gyllenhaal that are making rounds on the Internet reminded us just how much they are willing to sacrifice.

The 32-year-old actor made an appearance at the Hollywood Film Awards in Beverly Hills (pictured left), looking rather gaunt and lacking his beautiful muscle. Gyllenhaal revealed that he dropped around 20 pounds for his role in Nightcrawler, in which he plays an underground crime journalist reporting on the delinquent world of Los Angeles.

“I’m playing a character who’s hungry, figuratively and literally, who’s driven in ways to do things and succeed at any cost. And I think that defines a generation in a lot of way so I wanted to get their mentally and then have it transform me physically, because I am not one to rely on science as much as I am on just sort of instinct. That’s sort of the character [sic],” the actor told E! News.

He told People magazine, “It’s not different than getting into character for anything. It’s more about believe where you are and being present where you are. Who’s to say what the process is? I have a strange one. . . but I love what I do.”

OK, we love us some Jake Gyllenhaal, and he is an incredibly talented actor, but the man barely has the strength to support his own eyebrows! Not to mention that we can plant geraniums under those cheekbones. . . Somebody needs to feed him some fried chicken and a lard milkshake immediately!

We must admit, Gyllenhaal is not the first actor to lose enormous amounts of weight in frighteningly short periods of time. But is it dangerous? Sure, we appreciate sacrifice in the name of Art, but are these actors putting their health at risk in the process? Of course, they are! Actors are actually quite aware of the risk they are taking when going through a dramatic weight loss for a film and usually have a doctor on speed dial to monitor their descent into Skeletonville.

So, what are these risks? First of all, dramatic weight loss is almost unbearably stressful for your heart; since the heart is a muscle, it needs time to adjust to a new weight. Losing 50 pounds in three months can lead to irregular heart rhythms and even heart failure. Second, during drastically restricted diets, you may be missing out on your proper protein and calcium intake, leading your body to basically consume your muscles for protein and putting you at risk of osteoporosis. This is just the tip of the iceberg; drastic weight loss can also cause perpetual headaches, fatigue, gallstones, dehydration and menstrual imbalances in women (obviously).

With that in mind, let us remember some of the actors who have gone through these painful transformations for the sake of the moving picture (and probably won an Oscar). 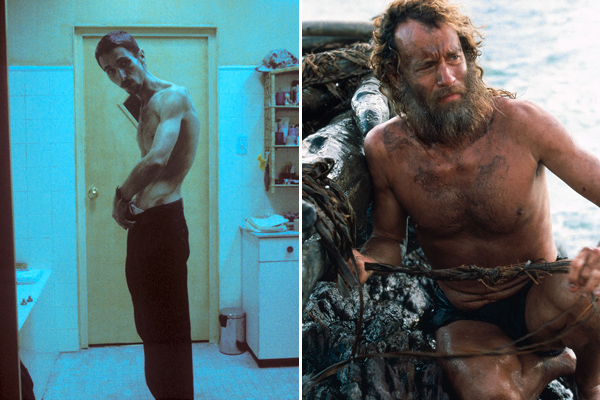 Christian Bale shed copious amounts of weight for a role twice thus far in his career. Twice! First, the actor lost a whopping 63 pounds to play an insomniac machinist in 2004’s The Machinist (pictured left) and then an unspecified amount for his role as the crack-addicted boxer Dicky Eklund in The Fighter, which won him an Academy Award for Best Supporting Actor. Now, that’s dedication.

Tom Hanks is another actor who has shed pounds for a role in a film more than once. His first drastic weight loss came with a role of a lawyer suffering from AIDS in 1993’s Philadelphia; Hanks dropped nearly 30 pounds for the movie and ended up winning his very first Oscar. The second weight loss, and probably his most famous one, was for his role as Chuck Noland in Cast Away (pictured right). Hanks gained 50 pounds to play the chubby systems analyst and then shed it all to portray the character’s transformation on the uninhabited island. Is that crazy or is that crazy?

Although this movie never really took off in North America in a big way (although the critics loved it!), it’s still worth noting the effort Michael Fassbender invested in re-creating Bobby Sands, a volunteer of the Provisional Irish Republican Army (IRA), who died on hunger strike, for the 2008 film Hunger. The actor shed an amazing 42 pounds for the role, reportedly consuming only 600 calories a day. As drastic as that is, it helped him portray the agony of a hunger strike and the measures taken by the IRA to break free from the British government.

Our honourable mention will include Matthew McConaughey who recently lost 40 pounds for his role as Ron Woodruff in this year’s release Dallas Buyers Club. There you have it. What do you think? Is it worth endangering your life for a realistic portrayal of character?

Why is Johnny Depp blond?
Kanye West and Kim Kardashian are engaged!
Colin Farrell talks rehab; are there any sober celebs?

Photo courtesy of Apega and WENN.com