We don’t understand. Johnny Depp attended the BFI London Film Festival sporting a much shorter, blond hairdo, and we can’t quite figure it out. 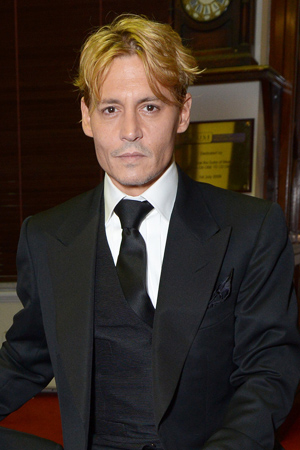 The world is a much darker place now, ladies and gentlemen.

Johnny Depp debuted what appeared to be short blond hair (although upon closer inspection, it’s rather yellow) at the BFI London Film Festival on Saturday, and we don’t quite know what to do about it. Is there a therapy group for trauma like this?

Johnny Depp pops in on CinemaCon >>

While Depp’s usual Keith-Richards-meets-homeless-pirate look is an acquired taste to begin with, and we do appreciate his discovery of the razor for the red-carpet event, why blond hair, and why so yellow? We can only cross our fingers and pray to the unknowable universe that it’s for a movie role.

Depp presented his abominating hairdo when he attended the festival as a surprise guest to present the legendary Christopher Lee with an award for his outstanding career. The two actors have previously worked together in Sleepy Hollow, Charlie and the Chocolate Factory and Dark Shadows. During the ceremony, Depp proudly called the 91-year-old actor a “great man” and a “national treasure.”

But let us not digress from the mane… We love Johnny, and he can actually do no wrong in our eyes, but we just wish his hair was dark and mysterious again. He’s just more charming and brooding that way, no?

We would love to hear your opinion on this issue (of national importance!): What do you think of Johnny Depp’s new blond do?