Benedict Cumberbatch will appear in five movies this year and is struggling to keep his private life out of the tabloids. We have a few suggestions! 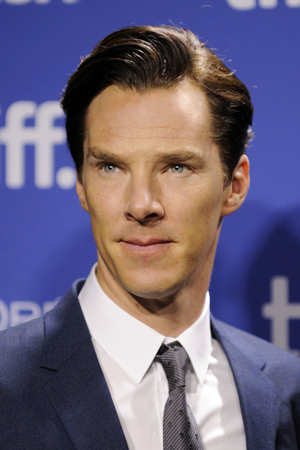 Is it surprising that Benedict Cumberbatch is now one of the most recognizable celebrities in the world? While it seems like a no-brainer to us, the actor is still boggled by his spreading fame, even in the remotest of places.

Cumberbatch is currently gracing the cover of Time magazine and told the publication he cannot believe he is recognized literally everywhere — like rural Oklahoma, where he was filming August: Osage County with a village of fellow A-listers.

“I thought, ‘Oh, I won’t get recognized here,'” he told the mag in its latest issue. “But the first café I walked into, the waitresses were like” — and here he tries to imitate gum-chewing and a Midwestern accent — “‘Oh my God! Aren’t you on television? Don’t you play Sherlock Holmes?’ It’s amazing the spread of that thing. It’s incredible.”

But if you think about it, Cumberbatch has appeared in Star Trek Into Darkness, 12 Years a Slave and The Fifth Estate so far this year, and he will also be appearing in August: Osage County as well as lending his voice to The Hobbit: The Desolation of Smaug in December. That is five credits to his name in a single year, spanning several film genres and reaching pretty much every possible demographic. It’s no wonder everybody knows who he is! Which can be quite agitating…

“Every time I’m seen at a bar with a girl, I get photographed,” he stated. “Anyone who has a computer knows my entire dating history. I get it. Paparazzi is an inescapable, immovable obstacle.”

But fear not, Benedict! We have figured out a few ways for you to keep your identity hidden when out and about with a lady friend or just running some errands.

Invest in a huge pair of ladies’ sunglasses

Wear the sunglasses and adopt a new accent

Everyone knows Cumberbatch is English, so nobody would ever expect him to speak with a… Slovakian accent! Or Mongolian. Or Spanish. Take your pick! Slap on a pair of shades, and bust out your best Swedish impression next time you’re ordering a meal with your date. You’ll avoid recognition and amaze your lady friend with your acting chops. It’s a win from all angles.

Fans have learned that Benedict dresses impeccably at all times; it’s just part of his charm. Well, scrap all that! Pull on a pair of grease-stained sweats, that 1994 Lillehammer Winter Olympics tee and those worn-out flip-flops you bought that one time… And voila! You are Benedict no more! Let’s be honest: No fan would ever stalk a man eating a burger off his knee with a machete, even if he does look like Benedict Cumberbatch. So give that a go. Have some fun with it!

We sincerely hope our tips will aid Mr. Cumberbatch in enjoying his life a little bit more. And hey, those are useful tips for anyone in need of avoiding others. Do you have any suggestions?

Which comic book villain should Tom Hanks play?
Britney Spears taking a break? These celebs should join her!
Single and ready to mingle: Zac Efron and other celeb bachelors