Britney Spears has hinted at a possible break once her residency in Las Vegas runs out, so we’ve rounded up a few other celebrities who should step away from the limelight and rest. 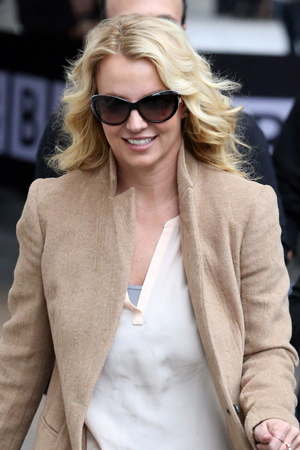 While we are tingling with excitement over the looming release date of Britney Spears‘ eighth studio album, Britney Jean, the 31-year-old pop icon is actually planning a prolonged break once the dust settles and her Las Vegas residency runs its course.

In an interview with the BBC Radio 1, Spears discussed her newest record and long-running career (her first album, Baby One More Time, came in 1999!), hinting at her impending break from the spotlight.

“It’s very exciting, and this album is different from any other album I’ve done,” she told BBC Radio 1. “It’s very moody and electric and different, so it’s pretty cool. It’s really nerve-racking, ’cause you spend so much time on it, and you’ve been really dedicated to this album… So it’s like my baby coming to life.”

Britney Spears’ new album is “to die for” >>

When asked if she ever thought she’d get this far in her career, Spears humbly answered, “No, I never did. I never felt that.”

Spears added, “Never in my wildest dreams… I’ll take a break after this one for a while.”

Go ahead, take a break!

While it is unconfirmed, and celebrities tend to threaten to take breaks all the time, we’ll treat it as a possibility. But this brings us to our next point: Some stars recognize the opportunity — or rather the need to back away from the limelight and rest (or to re-evaluate their lives) — but others just keep going until they burn out. So which celebrities are currently pushing their luck and should maybe take a prolonged vacation?

We’d love to top the list off with Miley Cyrus, who actually just returned from a break, but she’s being so raucous, we wouldn’t mind another break. (Maybe she’d come back wearing clothes…) Of course, this is unlikely; her album is absolute dynamite right now, so whatever she is doing is clearly working.

Next, we’d like to request a Johnny Depp break. While we love the actor and think he is incredibly talented, his movies have been rather sloppy of late, and his choices predictable. Maybe if Depp cleared his head, he’d return and finally win his Oscar.

We’d also love it if Lady Gaga took a break. A real break. Just lounge around for a year or two and then return to the studio. Since the singer’s shock value has been diminishing (everyone is now used to her “strangeness”), Gaga needs to captivate her audience with something new. So take a break! Put on some sweats, kick off those high heels, and eat some Cheetos.

There are many, many other celebrities who need to just chill out for a little while (looking at you, Justin Timberlake!), but these are our list toppers. Who do you think should take a break and sip some Kool-Aid?