They sure know how to make people talk! Tina Fey and Amy Poehler are returning to host the Golden Globe Awards for 2014 and 2015, and Twitter has gone crazy with messages of support. 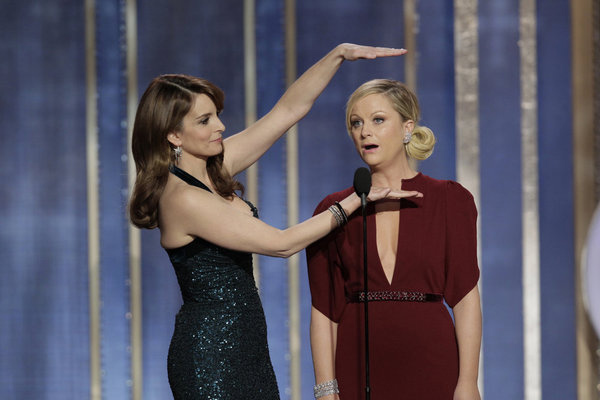 Yes, sir! According to the announcement from the organization, the duo has signed up to host the ceremony in 2014 and 2015. Best marketing ruse in recent history, yes?

“We are thrilled Amy and Tina have decided to return as hosts of the Golden Globe Awards for the next two years,” president of Hollywood Foreign Press Association, Theo Kingma, said in a statement. “Their return ensures that the Golden Globes will once again be the biggest, best and most entertaining awards celebration of the year.”

The two comediennes brought in a massive audience for the 2013 Golden Globes — 19.7 million viewers, to be exact (a 17 per cent increase from the 2012 ceremony) — it’s no wonder they were asked to return. Fey and Poehler are basically a hosting goldmine! First of all, they’re women, thus appeasing the feminists; they’re mothers. thus appeasing all the vocal parental censorship groups; and they’re hilarious, which works for everyone else.

To top off those qualities, both Fey and Poehler come with individual fan bases, which would follow them into the heat of battle and cook up a storm of free publicity via Facebook and Twitter. Both social networks are already filled with cheers of joy, even though the news broke just this morning!

Now, my life is complete. #tinafey and #amypoehler to Host #GoldenGlobes for Next Two Years.

Yusssssss. Tina Fey and Amy Poehler are back for the Golden Globes. #daymade #cantwait #awardseason #goldenglobes

Tina + Amy = better than anyone else. #goldenglobes #getumgirls!

It’s safe to say that the next two years will be great for the Golden Globe Awards, and the show is definitely raising the bar for the Academy Awards. The only way the Oscars can beat the Globes at the hosting game is if they teach baby pandas (because baby animals always win) to speak, make jokes and dance — and also hire Sir Paul McCartney to orchestrate the music for the night.

Are you excited to see Fey and Poehler return? Who do you think can rival their hosting savvy?