Scarlett Johansson is in for making some Academy Awards history. The actress may be nominated for her voice-only role in new film, Her. 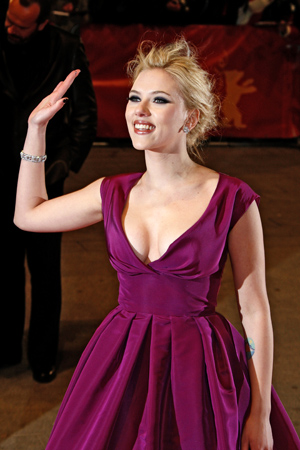 Now, this is different! Scarlett Johansson may make Oscar history for role in the Spike Jonze-directed film Her, co-starring Joaquin Phoenix.

The movie was screened on Saturday night at the New York Film Festival (which makes it eligible for this Oscar season), with special attention being drawn to Johansson’s memorable performance as Samantha, an advanced intuitive operating system that Phoenix’s character falls in love with. Now, the 28-year-old actress may become the first person in cinematic history to earn an Academy Award nomination for Best Supporting Actress without actually physically appearing onscreen.

“It’s Johansson who pulls off the trickiest feat: She creates a complex, full-bodied character without any body at all. Detached from her lethally curvaceous figure, the actress’ breathy contralto is no less seductive, but it also alights with tenderness and wonder as Samantha, both here on Earth and up there in the Cloud, voraciously devours literature, philosophy and human experience,” stated critic for Variety, Scott Foundas.

The Academy Awards tend to ignore non-traditional roles like this (like computer-generated characters), but we’re hoping that they will make an exception for Johansson, since she is not hiding behind any animation and her performance is garnering some rave reviews.

We’d also like to applaud this role, because it displays Johansson’s talent without the prejudice of her physical appearance. As an attractive actress, she is often objectified and taken out of context; in Her, the character solely relies on Johansson’s voice work.

We’re just going to have to wait until the Oscar nominations are released, but hopefully they will not overlook this movie. Check out the trailer below and weigh in!